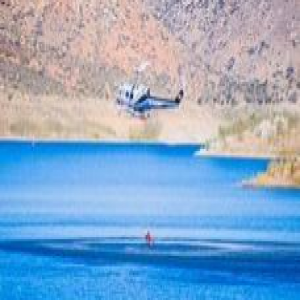 January 29, 2016 (San Diego) -- With an unusually intense winter weather season predicted, San Diego County Fire and CAL FIRE have doubled the ranks of swiftwater rescue-trained firefighters this year. CAL FIRE team members and the San Diego County Sheriff’s Department fire-rescue helicopter unit are also working together in case they have to pluck someone out of the water from above.

Firefighters warn there are many potential flash flood hazard areas inland, not just along the coastline.

“We have just as many hazards in the backcountry as in the coastal communities,” said CAL FIRE Battalion Chief Deron Hunt, one of the 65 swiftwater-trained technicians in the program. “There’s actually a lot of threats that people don’t think about. A low-lying dip in the road can be considered a swift water hazard. ”

The firefighters conduct rescues in the water as well as from the shoreline and are organized into teams in North County and South County. A separate partnership with the San Diego County Sheriff’s Department allows members on the Helitack Unit to conduct helicopter water rescues as well.

“We put extra effort into the program as part of the County’s preparations for El Niño,” said County Fire Chief Tony Mecham, who also serves as the San Diego Unit Chief for CAL FIRE. “The region is significantly more prepared at this time as part of the County initiative.”

The Swiftwater Rescue team got its first call the week of Jan. 4, when San Diego got drenched in the first major El Niño-driven storms of the season. The County Fire teams were on standby and two firefighters were ready to deploy with a Sheriff’s fire-rescue helicopter if needed. Heartland Fire requested that a team based out of Rancho San Diego assist with a call to help a man struggling in rushing water along a flood control channel in El Cajon.

The team had all of their gear and were prepared to get in the water, but never found anybody, said Mecham, who was listening closely to the call on his radio.

Hunt, who responded to the call, said the team followed the water channel first to El Cajon then to Santee, trying to stay ahead of the reported whereabouts of the man as the water flowed at an estimated 12-15 miles per hour.  While it was never confirmed someone was in fact there, Hunt said he was told the person may have gotten out on their own.

The Swiftwater Rescue program and some of the equipment had previously been in place as part of County Fire, but Mecham said the focus in previous years had been on the drought and elevated fire risk. But early last year, as emergency responders began to plan for what was then forecast to be a potentially strong El Niño year, there was a push to make sure staff were current on water rescue skills. Some immediately recertified their training capabilities and an additional 24 CAL FIRE firefighters were assigned to train.

In December, CAL FIRE San Diego Unit’s Helitack Unit, which is already in a partnership with the Sheriff’s Aerial Support to Regional Enforcement Agencies (ASTREA) to provide aerial fire suppression and rescue support, also began water rescue training with the pilots at El Capitan Reservoir. Prior to the training, both agencies purchased specialized equipment for water rescues, said Sheriff’s Sgt. Mark Johnston, pilot and supervisor for the ASTREA fire-rescue program. In all, about 17 personnel are now trained including pilots/deputies and CAL FIRE, he said.

Sgt. Johnston said, “It is necessary if we’re going to get a lot of flooding. We have to have the capability, training, equipment and experience.”

Johnston said the Sheriff’s ASTREA program can equip two of their three fire-rescue helicopters with hoists to do water rescues if needed. In that kind of rescue situation, a rescuer is lowered with the hoist to pull a person out of the water and do a short haul to shore as needed.

Specialized swiftwater rescue training is conducted at a training facility in Blythe, Calif. along the Colorado River and includes rope rescue operations and use of other water rescue equipment. Every technician needs to complete a specific number of training hours in the water and with ropes in order to be certified for each level, Hunt said.

“We are preparing for an active El Niño season,” said Hunt. “We’re prepared to mobilize all our swiftwater-trained people if the need arises and we have different levels of mobilization.”

For information on how to prepare you, your family, property and business for El Niño, visit the County Office of Emergency Service’s special El Niño readiness page.