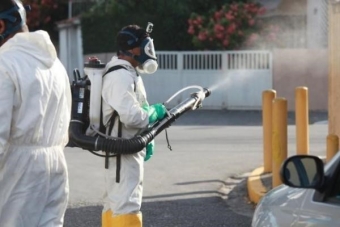 ECM has learned that the prior week, some properties in the Mount Hope neighborhood were sprayed over objections from property owners and without the consent of owners who were not home.  County workers obtained warrants to access properties, including cutting locks, at three homes, all on Quail Street.

Michael Workman, director of communications for the County, clarified how the spraying process works “We go get a warrant before we begin. Usually same morning in these recent cases. That early warrant clears us to enter unlocked areas or wherever the resident gives us permission,” Workman says.

He adds in an email in response to ECM’s inquiry, “If someone denies access we then take a dual approach. Our staff will engage the resident and answer whatever remaining questions and concerns they may have. Often this works and we are allowed access. If it doesn’t work, we return to court and get a warrant that allows us to cut locks and make entry.” He adds, “We do this if a resident is not home and a yard gate is locked as well.”

Workman notes, “In the few instances where this step was taken, most times, the resident allows access before the second warrant is served.”

The documents indicate that 75 properties were targeted for hand-spraying in the Sept. 6 spraying.

The County contends that spraying and even forcible entry of yards (not interiors of homes) is necessary to prevent Aedes mosquitoes found locally from biting an infected traveler and spreading Zika.  The law does grant broad latitude to government bodies for spraying to prevent spread of diseases. Spraying can be effective; yellow fever in Panama was virtually eradicated for decades due to dissemination of insecticides.

The World Health Organizations and the Centers for Disease Control consider Zika virus to be a serious threat to public health. The virus, rampant across South and Central America as well as the Caribbean, can cause microcephaly, brain damage, seizures and other serious harm to babies whose mothers contract Zika during pregnancy, health experts at these organizations warn. In adults, Zika usually causes no symptoms or only mild symptoms such as rash and fever, though some adults have had neurological damage from Zika.

But forced access and cutting locks on gates raises concerns over rights of property owners.  What if an owner is on vacation, and cutting a lock also provides easy access to burglars?  What if there are pets such as dogs or livestock such as chickens? Suppose someone has a chemicals sensitivity or allergy?

The County did allow at least one property owner who objected to spraying to avoid having the chemical sprayed, after inspecting her property and finding mostly rocks and dirt, no standing water in which mosquitoes can breed, a County official told ECM.

For now, your best bet is to clean up standing water in even small containers such as flowerpot saucers and toys.  If you’re traveling and have pets in your yard, leave instructions for whoever is caring for your animals on alternative boarding if a spraying notice is announced for your neighborhood.