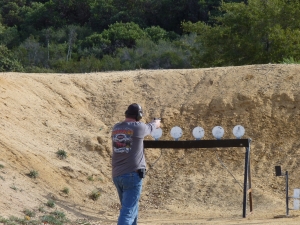 March 31, 2016 (Alpine) – The County has temporarily shut down paid military-style firearms training at Covert Canyon in Alpine because the owner missed a January 25 deadline for brush removal to prevent fires and obtain required permits , the San Diego Union Tribune  reports.

The article indicates owner Marc Halcon must close commercial operations for now, including paid training of military and governmental security forces, but can continue to have recreational shooting at the site.

The UT reports that Halcon also failed to apply for a grading permit for existing and proposed work, did not make improvements at High Glen Road or complete brush removal, and failed tdo retrofit a building with sprinklers and fire prevention materials. The requirements were all part of an October 27th agreement for the 160-acre site, which is surrounded by Cleveland National Forest.

Halcon will have to pay $7,000 in previously suspended fees and make a $5,000 deposit for the County to continue processing the site plans.

Halcon spokesman Michele Anderson told ECM, "We are working expeditiously to get those things resolved which we hope will lead to get the letter retracted or rescinded. We are working in good faith with the county."  He said work on the road is pending approval by the U.S. Forest Service and that other items that were behind schedule are now completed.  Reclassification of a storage building to a classroom triggered other improvements such as disabled access, he noted, when asked what caused the delays.

Marco Gonzalez, an attorney representing neighbors Clark and Robin Williams, has said the latest actions by Halcon are “consistent with the lack of respect” the applicant has shown over the years. The facility has previously been found to do grading without a permit and was shut down in the past.

His clients have filed suit against Halcon, citing California Environmental Quality Act violations, and have complained of excessive noise among other issues.

Gonzalez told ECM, “There has been a slight decrease in activity at Covert Canyon since the cease and desist order was issued, though recreational shooting persists.”

He added, “…the  CEQA litigation is moving forward and we remain confident the SAEO will be overturned.”