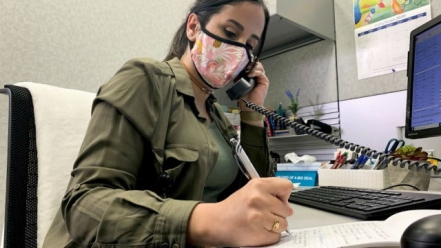 “Our case investigation system has been overwhelmed by the massive increase and very rapid increase in positive cases,” said Supervisor Nathan Fletcher at a media briefing. “We currently have 223 case investigators, and the simple reality is we need a lot more.”

Case investigators make the initial contact with a person who has tested positive for COVID-19, typically completing a two-hour interview. Then the case is turned over to a separate staff of contact tracers to reach those who may have been exposed.

Fletcher said the current team of content tracers is able to keep pace, but the county plans a big increase in case investigators. He said there would be 97 more case investigators at work by Friday, and hiring for 212 more is in the works.

So the county will soon have well over 500 case investigators and a staff of contact tracers that is about half of that size.

The Health and Human Services Agency reported 7,884 test results in the past day, for a positive rate of 5.7%, which brought the 14-day rolling average of positive cases down to 6.1%.

A daily record of 634 news cases was reported on Friday, but Fletcher said the positive rate appears to be stabilizing.

Dr. Wilma Wooten, the county’s public health officer, said she expected the state-ordered closure of many indoor activities to soon slow the increase in cases.

“With the actions taken over the past two weeks, and with your help, we expect that these cases will decrease,” she said.

For the second day in a row, no new COVID-19 deaths reported, and Wooten noted a recent decrease in hospitalizations.

“In the last three days, hospitalizations appear to be coming down, but we need that to decrease much more,” she said.

Three indicators of the pandemic currently exceed allowable levels. They are the number of recent community outbreaks at 16, the number of new cases per 100,000 residents at 145.3, and the percentage of new cases that are investigated within 24 hours at just 8%.