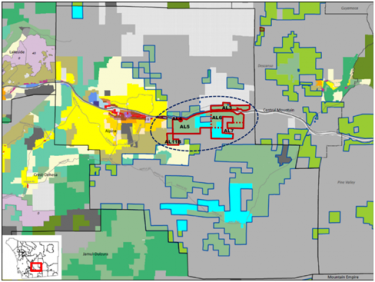 September 21, 2015 (Alpine)—A proposed Forest Conservation Initiative Lands General Plan Amendment was heard by Supervisors last year, when Supervisors directed staff to work with the Alpine Community Planning Group, U.S. Forest Service and property owners to develop boundaries and scope of work for a special study area. That information will be used to determine land use densities for thousands of acres of private property near or within Cleveland National Forest in the Alpine area, opening the door for major development of lands east and south of Alpine.

On Thursday, September 24, County staff will provide an overview of the draft scope of work for the Special Study at the Alpine Community Planning Group meeting in the Community Center at 1830 Alpine Boulevard.  An agenda will be posted prior to the meeting at: http://www.sandiegocounty.gov/content/sdc/pds/gpupdate/comm/alpine.html

Protections for these areas expired after the 20-year Forest Conservation Lands Initiative approved by voters ended due to a sunset clause, and Supervisors declined to extend it.  The Planning Commission has indicated it supports proposed higher residential densities in east Alpine, though Supervisors had concerns about fire protection, water, infrastructure and other issues.

Environmentalists including the Cleveland National Forest Foundation have voiced concerns over expanded development putting increased pressures on the forest, potentially harming wildlife and habitat, among other concerns.  Some residents have also opposed the proposed changes due to concerns over loss of rural character or views.

George Barnett, an Alpine Community Planning Group member who voted for residential expansion in the area, says the Supervisors’ call for a special study area is “both prudent and needed.” He believes some 3,000 new residences could be supported in the Special Study area, but wants to know more about infrastructure cots and how that would be paid for.

The rift points up a core issue that transcends the specific properties in question.

“The real issues include what is good planning,” Barnett concludes, “and what is in the best interest of the overall Alpine community?”

Everyone is entitled to an opinion on development plans in their community, that's fine. But let's not de-base the issue by using it as an excuse to throw mud at a community organization that you don't like. Back Country Land Trust has nothing to do with this development plan, and the commenter's claims about BCLT above are simply false. I've been involved with this conservation group for several years, and can tell you for a fact that their lands are in fact subject to property taxes (as undevelopable land) and subject to regular brush abatement every year as required by law. Additionally, let's correct the exaggeration that Wright's Field is "next to George's house" (which it isn't), and that 2,500 acres was put under BCLT management (it was 1,200 acres, and is nowhere near Alpine or the proposed development adjacent to CNF).
Unreal. Barnett and Back Country Land Trust (BCLT) take thousands of acres out of consideration for development (including Wright's Field next to George's house and the 2500 acres of former SDG&E land just put under BCLT "management") but George wants residential expansion in an area with poor fire access/egress, high slopes, high amounts of fuel for fires, extremely limited ground water, etc. What is "...in the best interest of the overall Alpine community" doesn't seem to apply when it is BCLT land (which, BTW is not subject to property taxes nor brush abatement).