These concerts are FREE to the community.
The following are upcoming concerts for February.  Stay tuned for more information on the spring series, launching in March:
Lisa Sanders
Saturday, February 4 - 2:00 PM
Casa de Oro Branch
Lisa Sanders has opened for such music legends as; B.B. King, Paul Simon and Bob Dylan, James Taylor, Sophie B. Hawkins, Stevie Nicks, Sting, Lucinda Williams, as well as, Gillian Welch.
Recently, Lisa opened for Bonnie Raitt. She is a two time San Diego Music Award Winner. You'll find her in San Diego and in venues all around the country playing the guitar and singing from the soul.
Michael Tiernan
Sunday, February 5 - 2:00 PM
Fallbrook Branch
Michael Tiernan survived cancer at age 16 and started traveling the world at age 18.  Through the experiences of what could be ten lifetimes, Michael is an artist who has plunged into and explored the deep spaces of personal and worldly conflict, the beauty of love and nature, as well as the meaning
of suffering and pervasive unhappiness that threatens our human experience on all sides.  In his music, heresurfaces from these depths beaming with a positive outlook for all of us.
Fred Benedetti
Tuesday, February 7 - 6:00 PM
Julian Branch
Fred Benedetti has performed in the United States, England, Germany, the Czech Republic, Canada, Taiwan and Mexico and locally with theSan Diego Symphony, the San Diego Opera, the Starlight Opera, the American Ballet Company, the Old Globe Theatre, Luciano Pavarotti, and jazz artist Dave Brubeck.  Fred is listed in the prestigious "Who's Who Among America's Teachers-2002" and received an "Outstanding Faculty Award" in 2001 from SDSU, the "NISOD" Excellence in Teaching award from the University of Texas at Austin in 1992 and an "Outstanding Chair" award in 1990 from Grossmont College.
Mair Rathburn
Tuesday, February 7 - 6:30 PM
Rancho San Diego Branch 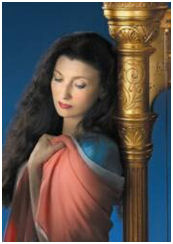 Mair Rathburn's repertoire runs the spectrum from classical to folk and contemporary music. Her singing has been compared to Sarah Brightman, andher playing  to Harpo Marx, her performance, a dash of Andre Rieu and her fans range from ages 1 to 101.  She is a popular entertainer throughout Southern California. She was the Lobby Lounge harpist at the Four Seasons Resort Aviara in Carlsbad and currently is the harpist for The Cosmopolitan Hotel in Old Town State Park.
Carlos Olmeda
Wednesday, February 8 - 6:00 PM
Encinitas Branch
Wednesday, February 15 - 6:00 PM
Imperial Beach Branch
Carlos Olmeda hails proudly from the acoustic singer songwriter school of performance. The big difference between Carlos' songwriting and performance styles and that of so many others is that Carlos' music transports you to a wide spectrum of emotional and cultural destinations.  On any given night, fans can hear at least four different songwriting styles in at least two languages performed with heartfelt passion as well as sense of humor.
Old Town Road
Saturday, February 11 - 2:00 PM
Poway Branch
Expect great vocals and instrumentation from this San Diego band, including Given Harrison (guitar/vocals), Dan Sankey (fiddle/mandolin/vocals), Becky Green (bass/vocals), and Steve Toth (dobro/vocals).  Delivering true bluegrass, be prepared to reflect on America's transition from a rural farm based community to an urban society while still revering the essential values of "authentic" music.
Peter Sprague
Sunday, February 12 - 2:00 PM
El Cajon Branch
Born in Cleveland, Ohio in 1955, Peter Sprague was raised in Colorado until 1963, when his family moved to Del Mar, California. Inspired by his father's love of jazz, he took up the guitar when he was twelve. By the age of fifteen he was devoting all his time and energy to learning music. He studied with San Diego jazz guitarist Bill Coleman, played in his high school stage band, and formed his first group, the Minor Jazz Quartet.
The full schedule of performers is available on the Acoustic Showcase web site.
This music series is sponsored by the Library Friends of San Diego County Library, Housing Opportunities Collaborative, eliteAudience, San Diego Bluegrass Society, and San Diego Folk Song Society.