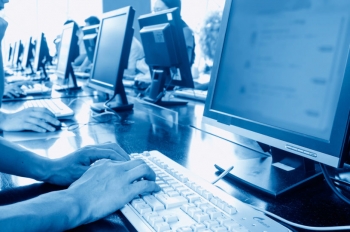 February 6, 2017 (San Diego) - High school graduation is a rite of passage for many but sometimes circumstances prevent students from getting a diploma.

“A lot of them say life happens, they had to drop out for whatever reason, start working and the next thing you know, it’s 10 to 20 years later,” said El Cajon Library branch Adult Services Manager Josh Mitchell.

But now the San Diego County Library is offering adults 19 years and older a way to graduate with a program called Career Online High School. The program is a partnership between the County and state libraries, and a company called Gale that provides educational and research resources to libraries.

“Students have seen this as their golden ticket,” said Mitchell. “They can do this from home and adapt school work to their own lifestyles, which is especially important for people who have children.”

Any resident of San Diego County can apply for the program. Students can transfer up to 14 credits from their former high school and complete the online courses in five to 18 months. They may also work toward a career certificate in any of eight different fields.

The County library acts as an intermediary between the Career Online High School and the student. Library staff directs would-be students to an online self-assessment and prerequisite course, and then conducts in-person interviews before accepting applicants. Once enrolled, the student is provided with an online academic coach to help guide the student to be successful.

The program doesn’t award a general education diploma, known as a GED, but an actual high school diploma.

Robert Johnson of Lemon Grove saw an opportunity with Career Online High School and ran with it. Johnson, 55, spent 34 years as a trucker and at one point had his own business but both went by the wayside.

“You don’t get anywhere by giving up,” said Johnson.

“I thought it was phenomenal,” said Johnson.

In addition to the diploma, he elected to take the courses for an office management certificate. He hopes to finish school in May or June. Once he’s earned his career certificate and his diploma, Johnson says they will open up new doors of opportunity that he’s never had before in terms of going to college and furthering his career.

“It was always a dark cloud over my head not having a high school diploma,” said Johnson. “In the end, when this is behind me, it will be a great sense of accomplishment for me. I completed high school.”