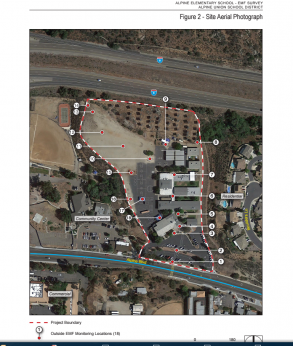 February 29, 2016 (Alpine) -- The San Diego County Office of Education on Friday released a draft Survey and Exposure Assessment  or electrmagnetic fields (EMF) for Alpine Elementary School.  The study concludes that  the Sunrise Powerlink transmisison line buried on Alpine Blvd.does not pose a significant safety or health risk to the school site." The study further finds that readings in and around buildings at Alpine Elementary "while not representative of a pristine EMF environment, were within a normal range of exposures one could expect in a society with electric power."

The County study examines 94 measurements taken inside and outside the school and  cites several reasons for concluding the site is safe.

A comprehensive study of California public schools shows that 80% of those schools and 83% of the classrooms had average magnetic fields less than 1 milliGauss (mG), the study states, adding, "The EMF measurements across the Alpine Elementary School site (excluding non-student areas and the parking lot, which had higher levels) averaged less than 0.9 mG overall, and 0.75 for classrooms." Those levels are slightly less than those at most schools previously studied in a 2001 survey.

There are no federal or state standards for what is considered a safe EMF exposure, although pooled analyses of epidemiological studies have shown a "consistent pattern of a two-fold increase in childhood leukemia associated with average exposure to residential power frequency magnetic field above...3 to 4 mG" (the equivalent of 0.3 to 0.4 microtessla), the study states.   Average values at Alpine were found to be less than those levels.

The state of California does require that new schools be built at least 37.5 feet from an underground 230 kilovolt (kV) power line, the voltage of Sunrise Powerlink in Alpine, according to the report. Although there is no standard for existing schools, the closest school boundary for Alpine Elementary is 50 feet from the buried Powerlink, farther than the allowable distance for a new school.

The Viejas Band of Kumeyaay Indians has announced that it has pledged $5,000 to the Alpine Education Foundation to fund an electromagnetic field (EMF) study of Sunrise Powerlink high voltage lines buried near Alpine Elementary School.

"In response to elevated EMF levels measured near the school, the Alpine Community has raised concerns regarding possible health risks to local children.  High EMF levels have potential links to leukemia and other serious health issues.  The study will measure between 15 and 20 separate locations on the property and in classrooms," a press release issued by Viejas states.

“We share in our community’s concerns over this issue and we appreciate the steps that the Alpine Education Foundation is taking to support the families of Alpine,” commented Viejas Tribal Chairman Robert Welch.

Allison Torres, spokesperson for SDG&E, noted that SDG&E in 2014 reached its 1,000 megawatt renewable energy goal, the purpose of Sunrise Powerlink when initially proposed. She concluded, "I hope this information helps show how Sunrise is truly benefiting the entire region with green, clean energy."