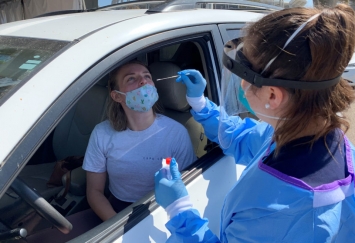 Dr. Wilma Wooten, the county’s public health officer, said that if the current trends continue, San Diego County will likely be added to California’s “watch list” of counties by the weekend.

Counties on that list were ordered Wednesday to close indoor dining at restaurants, as well as movie theaters, museums and similar businesses, for three weeks. Orange, Riverside and Imperial counties surrounding San Diego were affected.

“We anticipate by the weekend that we will be on that list as well,” said Wooten at a media briefing.

Out of 7,825 test results received over the past day, 6.1% were positive and the 14-day rolling average increased again, reaching 4.5%. As recently as two weeks ago, it was under 3%.

With the spike in infections, San Diego County has reached 105 new cases per 100,000 residents over 14 days—just above the state’s threshold of 100. The county has been above the threshold for the past two days, and if this continues for the next four days, the county will be added to the official watch list.

On Monday, the county ordered the closure of bars (except those serving meals with alcoho), and on Tuesday announced a 10 p.m. curfew for restaurants that serve alcohol.

“We’ve taken these steps specifically to target the growing outbreaks in social settings and the rise in cases in young people who are going out more and letting their guard down,” said Supervisor Greg Cox. “We simply cannot continue with these growing trends, and we had to take action.”

Wooten reported that the number of new community outbreaks has grown to a record 13 in the past week, and the county is facing challenges in investigating all of the new cases.

Patty Maysent, CEO of UC San Diego health, said COVID-19 cases at local hospitals plateaued in late April and early May, but have since spiked up.

“As healthcare leaders, we are very, very concerned about the trajectory of this pandemic,” she said.

Since the first local case in March, there have been 350,457 tests performed in San Diego County, resulting in 14,263 cases and 372 deaths

Wooten said the latest victims of COVID-19 were three men and four women aged 57 to 89. All had underlying medical conditions.

Dr. Francesca Torriani, an infectious disease specialist at UC San Diego Health, said the recent surge is being driven by people who have the disease but aren’t showing symptoms and are not taking precautions. She said the key to slowing the pandemic is physical distancing, wearing masks, and not socializing outside one’s household.