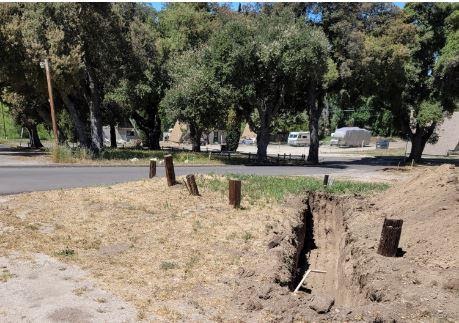 By Miriam Raftery
Photos and video by Thomas Michael Coyne
View video: https://www.youtube.com/watch?v=wbXJXLh-3H4
May 15, 2021 (Boulevard) – Following an inquiry by East County Magazine in response to concerns raised by a member of the Boulevard Planning Group, the County has sent an inspector out to the Live Oak Springs RV Park and ordered the owner to halt work and remove illegal upgrades.
Thomas Michael Coyne, a Boulevard Planning Group member, sent East County Magazine a copy of an e-mail that he sent on May 7 to Nathan Fletcher, Chairman of the Board of Supervisors, and to Supervisor Joel Anderson alerting them to the issue.
Coyne said residents of Live Oak Springs reached out to him after noticing trenching and grading activities at the RV park recently sold to Anthony Windle.  Historically, the property has been used as a dry RV campground with no individual hookups for water, sewer or electrical, and has been rented primarily for special events on holiday weekends.
The Boulevard Planning Group met on March 4 with Windle present, as well as representatives from the County’s Code Compliance, Dept. of Environmental Health, and Dept. of Development Services and Land Use.
At that meeting, staff determined that the owner could only provide maintenance for use as a dry RV campground. “County staff stated that new hookups to individual RV spaces could not be installed as it would constitute an expansion of the park.  County staff indicated that all of the piping and cleanouts that had already been installed would need to be removed,” Coyne’s letter states. “Mr. Windle, who was present, expressed no opposition…However in the intervening months between March 4, 2021 and the present day no remedial work to remove such piping and trenchwork improvements have been completed by the property owner.”
Coyne contended that County staff had been unresponsive to the addition of 12 new meter pedestals between May 4 and 7, even after the initial order to remove earlier additions.  “I would really appreciate your assistance with this matter before additional, irreversible damage is caused to the Live Oak Springs community,” his letter concluded.
East County Magazine reached out to the County and on May 12, we received this response from Donna Durckel, the County’s group communications officer for Land Use and Environment.
Durckel replied, “The County’s Planning & Development Services Department (PDS) sent an inspector out to Live Oak Springs RV Park this morning (Wed) and a stop-work order was issued.”
She indicated that  Windle had secured a permit from PDS’s Building Division for the replacement of existing electrical pedestals on the RV campground.  But she said, “Inspectors found that additional electrical pedestals were installed, which is beyond the scope of his permit. Mr. Windle will be required to remove those improvements that were not included in the permit.”
If Windle continues to defy county orders, he could face enforcement action.  “Whenever possible, we like to achieve voluntary compliance in these situations by working with property owners to resolve the problems,” Durckel said. “However, if unauthorized work continues in the RV park, we will escalate our enforcement. This could include issuing a citation or legal action.”
She confirmed that the property is categorized as a legal non-conforming property, which means it existed prior to County zoning codes. “With this categorization, expansion or changes to the property are not allowed. Mr. Windle was informed of this condition,” Durckel made clear.
The RV park issue is just part of a broader problem in the rural community of Live Oak Springs, however.
In a separate email to ECM, Coyne said many Live Oaks Springs residents have owned their homes for generations, yet the area has fallen into disrepair.  They fear accelerated deterioration if the park is allowed to convert to a permanent mobile home/RV park. 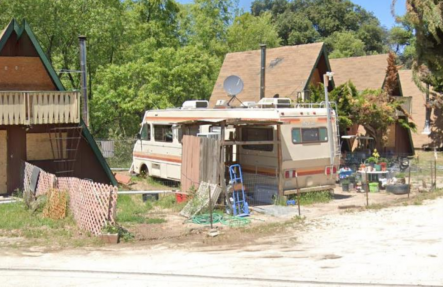 Coyne sent photos showing rundown conditions in the Live Oak Springs community.
“In other communities with substandard housing, governments have assisted property owners in improving housing,” he wrote. “Here, the County is just allowing conditions to worsen. It amazes me that in such a wealthy County as San Diego, leaders and County staff are not more proactive in addressing issues of substandard housing in the rural backcountry. These communities are totally being ignored.”