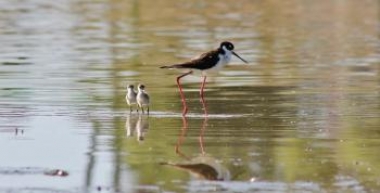 View a video by Billy Ortiz of water flowing into Lindo Lakes.

View an earlier video of stilts in low water.

View a Facebook page created by Ortiz with photos of wildlife at Lindo Lakes.

June 22, 2013 (Lakeside) – Migratory shorebirds at risk for nesting areas drying out will be saved, thanks to an inquiry from Lakeside resident Billy Ortiz, a volunteer with the Lakeside River Park Conservancy.

“I am happy to inform that as of June 21, 2013 San Diego County Parks and Recreation is pumping fresh water into Lindo Park Lake’s East basin,” Ortiz informed ECM today. The decision is a result of a request made in late May by Ortiz, also an ECM photographer and publicity chair of the Lakeside Hisotrical Society.

“The water level was evaporating fast and the nesting migratory shore birds, Black-necked Stilt’s and Avocets, were on the verge of abandoning their nesting habitat,” Ortiz said. “The Avocets sadly not only abandoned their eggs but also the area do to the vanishing buffer/safety zone of the water between them and the public trail that circles the 2 lakes.” 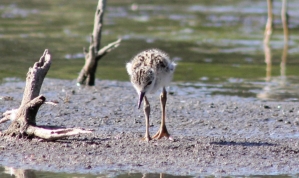 Lindo Lakes were once San Diego’s only natural lakes, according to Ortiz, though water is now pumped to keep them filled,  providing a unique wetlands utilized by many migratory shore birds as a primary food source to raise their young.   Lindo Lakes Park consists of two lakes, east and west, that have both been filled by pumps paid for with tax dollars.

A valve was installed a few years ago between the two lakes, but last year the east basin dried completely.  This year, there was just enough rain to fill the east basin, attracting rare species such as Cinnamon Teal and Wood Ducks as well as Stilts and Avocets, according to Ortiz.  Some hatched chicks in recent weeks that could perish if the lake dries out.

“The water has become 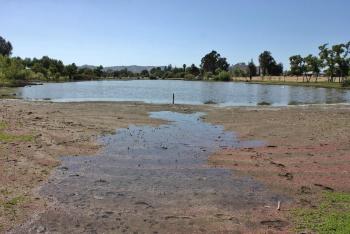 so low that a first time visiting/nesting pair of Avocets abandoned their nest and the area,” Ortiz wrote in his recent letter to County Parks. “Could we please allow some water to flow into the East basin?”

On June 21, Amy Harbert, Chief of Operations for County Parks and Receration, informed Ortiz that the County had come up with a plan and would be pumping water to the East basin of Lindo Lakes to help out the nesting birds and the already growing Stilt babies. Ortiz said Harbert told him, “They care very much about our Lindo Park and the wildlife that comes here. It took a few days to develop the plan after much research as to how to go about transferring water without upsetting the delicate biological eco system of the lake.”

Josh Bugiel the park ranger on duty, said that they dug up some old plumping blueprints of the underground pipe system dating  back many years and discovered that there were bypass valves that would direct the pumped water from one of two wells to the far east end of the east basin.

The Park service will pumping approximately 150 to 200 gallons per minute into the lake in the daytime only so that they can monitor the water level and not inundate the active Stilt nests.

The much needed water will only be added until the nesting season is over.  Bugiel said  they would play it by ear for now to insure a successful nesting season for the Stilts.

SDCPR and the community of Lakeside have plans to dredge both lakes to improve water quality. An Environmental Impact Report will be required before any dredging takes place; there is also the need for funding, including grant funds.

Bill Saumier , Senior Park Project Manager for SDCPR,  told a standing room only community meeting back in May of 2013 that public input is welcome and that this will be a project that will take some years and millions of dollars to accomplish. 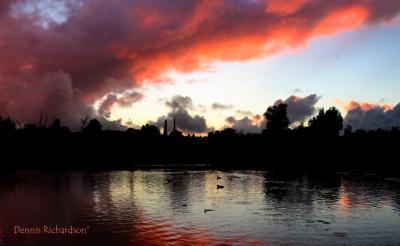 For now SDCPR will take care of the migratory birds.