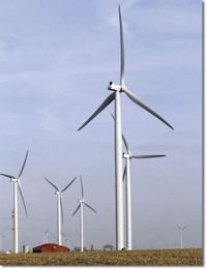 The proposed turbines were part of the Tule Wind project, which also includes 62 turbines on U.S. Bureau of Land Management property in McCain Valley, seven turbines on state property, and 18 on Ewiiaapaayp tribal lands. To date, only the federal portion of the project has been approved.

“The Tule Wind decision was precedent setting in that turbines were denied on private land in the Boulevard area and the plan amendment was denied,” said Donna Tisdale, chair of the Boulevard Planning Group. “Today’s decision also bodes badly for Enel Green Power's Jewel Valley wind that is proposed for about 7,000 acres both north and south of I-8."

Staff recommended the denial, noting that the towering turbines were incompatible with existing community plans due to height. Planners also rejected a plan to modify Boulevard’s community plan.

Several planners made clear that they have serious reservations about approving any industrial-scale wind projects on lands under county control—dealing a severe blow to wind industry aspirations.

Commissioner Peder Norby voiced concern over “the equity of saying `too bad’ to two communities so that the other 26 can win,” adding, “It would be hard for me to ever approve large wind turbines on county land.”

Norby said he lives near a high-voltage tower in Carlsbad. “I look at a 400 foot tall tower and wish it wasn’t there,” he noted, adding that it is visible from 40 to 50 miles away on a clear day. He suggested that the 12 megawatts of energy lost by denying five wind turbines could alternatively be produced with a small solar farm, with rooftop solar on existing buildings, or with small-scale personal wind turbines.

“I don’t care about the economics. I care about what’s happening in the backcountry,” Commissioner Bryan Woods said of the precedent-setting proposal to put turbines taller than the tallest building in downtown San Diego into rural areas.  “In the future, I will look at cumulative impacts,” he said, referring to more than 40 large-scale renewable energy projects proposed in East County.

Commissioner John Riess voiced concern over noise generated by wind turbines. “An A-weighted scale simply doesn’t work,” he said, recalling a pipe factory that generated complaints from neighbors despite efforts to sound-proof the building.  “We need to deal with that and how we regulate these things for the future.

Noting that the Campo Indians want to triple the number of turbines on its reservation from 25 to 75 not far from the Tule Wind site, Commissioner Michael Beck also voiced concern over cumulative impacts and opposition to amending the community plan.  “We’re being asked to make findings we cannot make,” he concluded.

Planners also voted to require Iberdrola to underground a power line needed for Tule Wind turbines on federal land.  Placing the lines underground increases the cost, requiring blasting of boulders, while the project’s revenues will be decreased by removing the five turbines on county lands.

Commissioner Leon Brooks suggested overhead lines might be better for this site, citing potential for cultural resource sites to be disturbed.  “I’m certain that will be a problem.”

But a staffer insisted that since the site is on bedrock, the chances of finding Native American burial sites is “highly unlikely.”

Tisdale asked to speak prior to the vote, but was denied, since public testimony was taken at a prior meeting.  “They’re certifying the EIR with this vote,” she told ECM. “The PUC already certified it without a public hearing in April. It says nothing about infrasound or low frequency noise.”

Overall, however, the Commission’s actions sent a clear message to the wind industry: San Diego’s planners are not willing to allow the health of residents or the rural character of East County to be sacrificed in order to accommodate wind energy developers.

The victory for rural residents may be short-lived, however, since the San Diego Board of Supervisors ultimately has the final say on whether industrial wind facilities will be allowed on county-controlled lands.

The balance of power may shift when Supervisor Pam Slater-Price steps down in January after her replacement is chosen by voters in November. Candidate Dave Roberts has voiced concerns over wind energy impacts, while his opponent, Steve Danon, has championed streamlining procedures for wind testing towers and other development projects as a staffer for pro-development Supervisor Bill Horn.

With federal subsidies for wind energy expiring at year’s end, however, time is running out to gain approval of wind projects before the subsidies end.

This is far from over. While you are celebrating with feelings of relief, they will be sneaking through a hidden back door. It would be foolish for anyone to ever think this was resolved.

Sometimes justice is served. Congratulations, Miriam. This is wonderful news.

Your observation that nothing in nature is this tall was astute, and suggesting they disguise the turbines as giant Sequoias, similar to how cell phone towers must resemble fake trees, was brilliant.