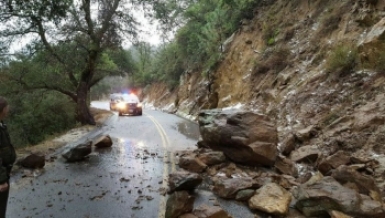 Photo: The winter storms caused damage throughout the County such as flooding and this rockslide on Wynola Road in Julian.

Residents asked to report all storm damage: County has not reached level yet to get help for individuals or businesses

Photo: The winter storms caused damage throughout the County such as flooding and this rockslide on Wynola Road in Julian.

February 5, 2017 (San Diego) --The County of San Diego proclaimed a local emergency Friday, due to damage caused by the severe winter storms that hit the region late last month.

The proclamation will cover damage experienced by cities, special districts and the unincorporated area in the region, helping make the region eligible for potential federal and state resources. These resources could help repair roadways, public infrastructure and cover emergency response costs. Storm damage costs are being compiled.  It is not believed that our region’s storm damage will meet state or federal thresholds to provide assistance to individuals or businesses.

“Our recent storms took a big toll on some of our communities and we need to do all we can to tap into whatever federal assistance may be available,” said Board of Supervisors Chair Dianne Jacob.

Among the effects of the storm were two resident fatalities and multiple first responder injuries, as well as school closures, and considerable damage to roads and other public infrastructure. That damage included the collapse of part of Alvarado Street in Fallbrook, and a partial roadway failure on Luneta Lane in the Fallbrook/Bonsall area, a sinkhole in Mission Trails Regional Park which exposed gas and water links, and the need for widespread debris removal.

Four local cities have also proclaimed emergencies, including San Diego, Chula Vista, Poway and National City. Last week, the governor proclaimed a state of emergency for a number of counties, including San Diego. The state proclamation could allow for eventual financial aid from the state and/or federal government to help cover costs to repair roads and public infrastructure.

The County continues to collect online damage surveys from homeowners, renters and business owners. However, it is important to note that the County hasn’t met the thresholds required to qualify for the lowest level of financial assistance available to property owners, which is a low-interest disaster loan program offered through the U.S. Small Business Administration.