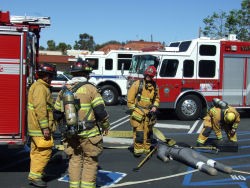 March 7, 2015 (Spring Valley ) – Out of money to complete construction and maintenance of a partially-built training facility in Casa De Oro, San Miguel Fire District on March 11th will consider a proposal from the County Fire Authority to take over the lease, move forward on construction and assume maintenance responsibilities.

The training facility was deemed a high priority in 2007 for San Miguel, which signed a 30-year lease with Otay Water District for the 3.53 acre site, which would be operated jointly with Heartland Fire Training Authority (HFTA).  From 2007 to 2009, San Miguel received over $2 million from an Indian gaming grant to build phase I, which was completed In June 2012.  But there was one big problem:  the site included only concrete, fire hydrants, props and a bridge overpass – but no water meter, so the training facility is still not operational.

According to a staff report sent to the San Miguel board and authored by Tony Mecham, Cal Fire and County Fire Chief, “The District and the HFTA both lack the funds to develop the remainder of the project to completion.” Local governments that comprise the Heartland Fire authority have been challenged to raise the funds and the cost of opening the facility exceeds $1.5 million – not counting the ongoing maintenance costs.

The County would invest $1.4 million in fiscal year 2014/2015 to make the facility operational.  After that, the County Fire Authority will commit another $500,000 for development of training props and facilities.

The County will control the lease and County Fire training staff will maintain the center.  County Fire will remain a member of the HFTA with an in-kind membership with direct funding of the training center, and HFTA can reallocate funds currently dedicated to HTF-Spring Valley to ongoing issues at the current HTF-El Cajon site, the memo adds.

The staff report recommends that the San Miguel Fire District board author a resolution to enter into negotiations with Otay Water District to assume the master lease.

San Miguel taxpayers would incur no costs and the long term estimated savings for the district would be in the millions of dollars for the county to develop and operate the training center.

BVLD is currently staffed over 95% of the time with the assistance of a partner agency within the SDCFA. It maybe has 1-2 dark days in the month when people have real jobs/school. In april whitestar and bvld will merge and staff the new station so in theory it will be staffed 100% of the time by either SDCFA and/or CalFire. I do agree with you on the dire situation of the volunteer program. As for the lack of volunteers there are only so many people that will take 4+ months away from work and family to go through an academy to work for $4.10 hour. There are good, dialed guys with families who drive 50 miles to 'volunteer' 6 days in a row to keep stations staffed and open. That is not sustainable, they get hired and leave.
...does the County need a firefighter training center? THEY DO NOT EMPLOY ANY FIREFIGHTERS! I have never seen an outfit as disorganized as the County Fire Authority. They buy fire trucks and water tenders but have no one to drive them. They build new fire stations, Boulevard, when the existing station is dark 20% of the time. They can barely find 100 "volunteers" to train over a years time, placing very little stress on existing training facilities, yet they want to build another training facility? Good thing they do not grow vegetables. When you could find a head of lettuce it would be $20 a head!