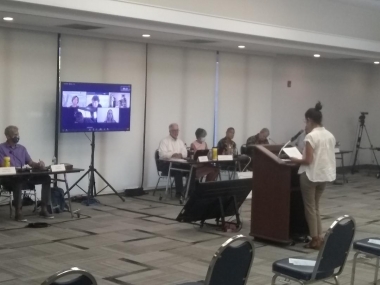 Supervisorial district 2 may be split due to population increase; urban and rural residents voice concerns

August 30, 2021 (El Cajon) -- The process of redrawing boundaries for San Diego County’s five supervisorial districts is underway and the independent commission that will determine those lines visited El Cajon Aug. 26 to listen to the public.

Commission Chairman David Bame said the process that happens every 10 years uses two main sources of data, the 2020 U.S. Census and public input. The Commission, a group of 14 county residents, most with advanced degrees and sterling resumes, take testimony at seven public hearings held throughout the county.

The Aug. 26 meeting at the Ronald Reagan Community Center at E. Douglas Ave in El Cajon was one of two in East County. The other, at the Spring Valley Community Center, is scheduled for Sept. 25 at 1 p.m. But all the meetings can be accessed via the Internet, are open to anyone, and testimony is not confined to residents of the district where the meeting occurs.

The goal is to get as much data, and solicit as much public comment about the five districts, as possible so that the Commission can make the fairest decisions when redrawing boundaries, Bame said. This includes obtaining information about communities of interest, or those that share a common language, history and economic interests that should be retained within a single district.

The importance of the redistricting is underscored by the fact that the San Diego County Board of Supervisors controls an annual budget of $7.23 billion.

According to Census data provided at the meeting, District 2, which is the largest in geographic area, grew by about 42,000 residents over the past decade to 662,616, making it the third largest in population (behind District 3 and 5). Overall, the county’s population grew by about 203,000 from 2010, or 6.6 percent.

Because the goal is to get each of the districts to be nearly equal in representation, with about 659,000 people, District 2 could be looking at reducing part of its population and area to a less populated district. District 2 is currently represented by Supervisor Joel Anderson.

A number of speakers advised the commission that because of the way the Census was conducted, some ethnic groups are getting undercounted. Ramah Awad of the Majdal Center for the Arab Community Center of San Diego said because Arab Americans are classified as white, there really isn’t accurate data being provided on the Arab community.

Jeanine Erikat noted that District 2 has one of the largest number of refugees of any in the county, and that San Diego County has the most refugees of any county in the state.

Yasmeen Obeid, who identified herself as an advocate for the Muslim community, said that group has a large concentration in District 2 and that it was important that the Arab community wasn’t separated as they were during the last redistricting process in 2010.

El Cajon is home to the largest concentration of Chaldeans, who are Christian Iraqis, in the nation. By one estimate it has about 15,000 of this group. The city also has been inundated with many people from Africa and the Middle East, including Afghan refugees now arriving.

At least one Arabic speaker provided comment with the help of a translator. Douha Alhalabi, who said she was a Syrian refugee and living in El Cajon for the past four years, encouraged the commission to keep El Cajon within District 2, and asked for more support for work opportunities.

Some of the speakers providing their comments via the Internet were from other districts. One, Kori Jensen, identified herself as a Latina member of the Oceanside City Council. According to published reports, Jensen, who was appointed to the seat in January by the Council to fill a vacancy caused when Esther Sanchez became mayor, is facing a recall in her district. Recall proponents have until Sept. 10 to collect sufficient signatures to put the issue to a special vote.

The Commission also received a few dozen comments that were emailed including one from Donna Tisdale, who has chaired the Boulevard Community Planning Group since the 1990s. Tisdale asked if the District 2 boundaries are changed, to avoid splitting up any of the rural community planning areas.

“Our Congressional district splits our Boulevard community in two, which makes it very difficult for us. It is hard enough as it is to get the attention of one County Supervisor, never mind getting the attention of two,” she wrote.

The redistricting public hearings will run through the end of September and will be followed by a line drawing phase and more public hearings in October, November and December. The tentative date for the Commission to adopt its final map is Dec. 15. From there, the map goes to the Board of Supervisors for final adoption.

All the meetings are being recorded and posted on the commission’s website at www.sandiegocounty.gov/redistricting.