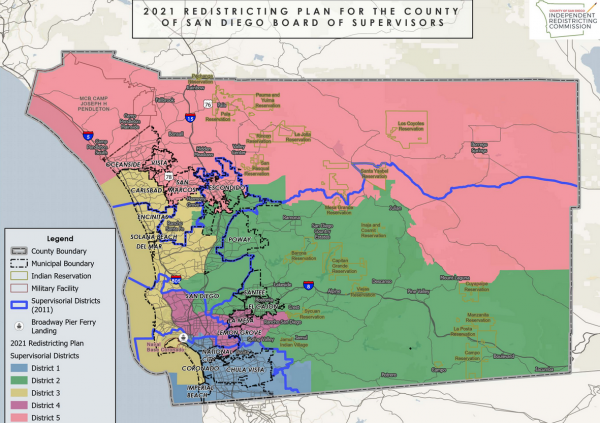 For an analysis of the new state legislative districts, see https://sdrostra.com/new-congressional-and-state-legislative-districts-a....

The biggest change impacting East County is shifting several communities out of District 2, represented by Joel Anderson, into district 4, represented by Nathan Fletcher, the current chair of the County Board of Supervisors. Areas shifted into Fletcher’s district include La Mesa, Lemon Grove, Rancho San Diego, Mount Helix, and parts of Spring Valley. Fletcher’s new district  also includes unincorporated areas of the city of San Diego, while he loses coastal areas including La Jolla.

The commission made one last-minute change to keep the city of El Cajon in District 2, after earlier proposing to move it into District 4. However some Chaldeans have objected to splitting their community between Districts 2 and 4, threatening legal action.

District 1, represented by Nora Vargas, is now a majority Latino district that includes the cities of Imperial Beach, National City and Chula Vista as well as some unincorporated areas in the southwest portion of the county.

District 5, represented by Supervisor Jim Desmond, encompasses the north part of the county from Oceanside through Escondido, San Marcos and Vista east through Santa Ysabel and the desert community of Borrego Springs.  It also includes several Native American reservations.

This was the first time that local boundaries were set by an independent commission. The 14-member commission capped off a year of work and 49 public meetings.

The commission considered four maps as it strived to address community concerns while complying with complex redistricting laws. Those laws require that districts have equal populations but also mandate that minority voting rights be protected and communities of interest be preserved, including communities with shared economic, geographic or cultural interests.

On social media, some East County leaders and activists shared reactions to the outcome.

Kathleen Coates Hedberg, a member of the Helix Water District board and president of the Grossmont-Mount Helix Improvement Association, voiced sadness after listening to the hearing.  “Mt. Helix and Rancho San Diego, my homestead life for over 20 years, is changing to the Central County Supervisor Area with the city of San Diego…I will not be East County anymore…I loved my rural community but city close, but I guess times have changed and we are now not so rural anymore.”

Lemon Grove Councilman Jerry Jones reflected, “It’s not so much about being rural as much as being a sub-region with a sense of community identity that is not swallowed up by the politics of San Diego.”  He drew parallels to SANDAG, where East County concerns have often been ignored by a majority controlled by San Diego and South Bay communities.   “It’s not about protecting anyone. It’s about silencing communities and securing more power for the 800 pound gorilla that is the City of San Diego.”

Oday Yousif Jr.,  a Chaldean activist, noted that not all Chaldeans wanted to keep Rancho San Diego in East County’s District 2.  “I actually am in favor of keeping Rancho and El Cajon together, but I don’t care whether that’s in the central district or the so called `East County’ district. I think the Chaldean and Iraqi community are a COI {community of interest) that should stay together, but it doesn’t matter where.”

While many in East County had hoped to keep cities such as La Mesa and Lemon Grove in the same district with Lemon Grove, Santee and rural areas, there is one potential silver lining to the changes.

Formerly, East County had only two representatives on the County Board of Supervisors, meaning the majority with mostly coastal and urban districts could and often did outvote the East County supervisors. Now, three supervisors will have significant portions of East County in their districts and ignoring those voices could prove politically risky.  Whether Supervisor Fletcher will side with San Diego interests, or listen to those East County residents now in his district, could prove crucial in future supervisorial decisions on everything from wildfire protection to development and transportation controversies.

The maps are final, unless a lawsuit results in a court decision ordering further changes.