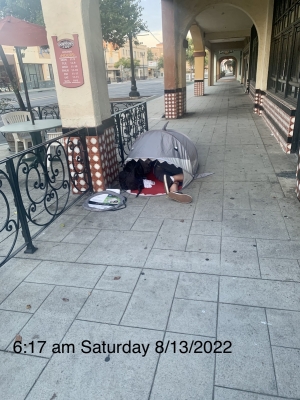 Photo by Robert Gehr: A homeless person sleeps in a tent on Main Street in downtown El Cajon.

Mitchell, in an email sent to El Cajon’s Mayor and City Council, said he told County staff in a pre-grant question and answer session that the city intended to apply for a grant to buy land for a shelter.  “The response was that the city should still apply and explain how the site will be obtained,” he wrote.  “During their follow-p questions of the City’s grant application, they asked for an update and we indicated that an appraisal was on its way and that the formal offer was about to be made.”

The application was made through the County’s Capital Emergency Housing Solutions Grant Program, for which Supervisor Joel Anderson had urged East County cities including El Cajon to apply.

Anderson, in a letter to the Mayor and Council sent Nov. 17, said, “Staff from the County’s Office of Homeless Solutions will contact the City of El Cajon staff regarding the next steps in the process.”  Supervisor Anderson, whose letter to the Board of Supervisors proposed the grant program, added, “The County is committed to working with the City and any other potential partners in East County to explore your ideas.”

But Mitchell observed, “I am not sure how many cities have the luxury of buying and holding property in the hopes they can fund a shelter in the future.”

Mitchell said city and housing staff have devoted considerable time and effort into the grant, working with outside organizations including the East County Homeless Task Force and San Diego Rescue Mission.

“In retrospect, had I known this was a deal killer, we would have recommended either not applying (saving a lot of staff time) or giving the City Council other options to consider,” Mitchell concluded.

Though the news comes as a disappointment for city officials seeking help to house the homeless, the greatest loss by the County’s rejection of a plan for a long-awaited shelter will be felt by the growing number of homeless people camped on streets, in parks or riverbeds. The County’s rejection of El Cajon’s grant proposal means these unhoused people will still have no safe place to sleep, let alone call home.