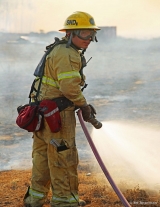 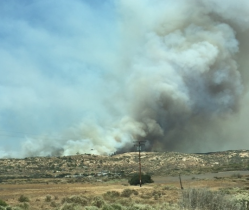 Supervisor Dianne Jacob has scheduled a follow-up meeting with concerned residents for September 27th from 2 to 4 p.m. in the Potrero Library at 24883 Potrero Valley Rd. ECM has asked Jacob's office why this meeting isn't scheduled on a weekend when working people can attend.

A previous community meeting was held at the Barrett Junction Café, as ECM reported.  There, residents thanked firefighters but voiced numerous concerns over failures with communication infrastructure, law enforcement issues especially the inability of residents to get help to locate a missing couple later found dead by community volunteers, and serious problems getting help for livestock and pets in the evacuated area amid triple-digit heat.  At other meetings, residents voiced concerns over lack of water for firefighting in Lake Morena and dangers of evacuating along a burning highway; some Potrero residents say they want a facility to shelter in place.

While the county report makes some suggestions for action to improve operations and communications in future fires, it largely short-shrifts many of the most serious concerns raised by residents.

ECM has contacted the County to ask if the public will have opportunities to have their concerns included in an amended update of the after-fire report on the Border Fire.

includes ten issues along with recommendations. As other readers have suggested the two personal deaths for apparently unknown reasons ought to have been an issue with recommendations which would lessen the chance of death in the future. There were infrastructure assessments, how about death assessments. Human life is supposed to come first in fire response, we're told. . . . .Also one issue was - - - "Issue: Fewer landline telephones means fewer residents are reachable during evacuations through the region’s mass notification system, AlertSanDiego . . .recommendation: Continually promote and encourage residents to register their mobile phones with AlertSanDiego." . . .my comment: I was just speaking with someone who was traveling back east near the coast when her cell phone (619 area code, which was OFF) rang and delivered a message to evacuate because a hurricane was coming. She hadn't registered with anyone in North Carolina, but she got the message. Did this situation contribute to the two deaths?
I am stunned that this After Action Report did not even MENTION the two people who died as a direct result of the fire. How can this report have ANY validity if the loss of life was not even addressed? Is there nothing we can learn from their deaths? Is an AAR supposed to be a pat on the back— or do we really want to improve and help prevent the loss of life next time? WHY didn't Jim and Kyrie evacuate? ... were they not notified? did they choose to stay anyway? were they trapped? What SHOULD they have done to improve their chances of survival? Why did authorities believe their car was gone throughout the fire? (Their blue van was in-operational and easily seen from Hwy 94) Why was there so little concern for their whereabouts after repopulation? Why did authorities believe Jim had been seen down near the border RR tracks (he wasn't), or was with friends (he wasn't)? At the very least, their deaths should inform us and help us all learn how best to survive a fast moving fire when we are trapped. What is the purpose of this After Action Report if not to improve things "next time." And we know there will be many "next times."
2 people died in this fire - why was that not even mentioned? First no one with the county thought they deserved to even be FOUND and now they must think they don't deserve to be mentioned in a report about a fire that took their lives?