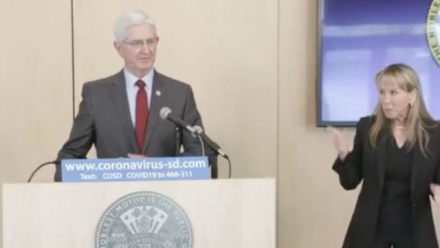 Wooten said the two infants are both under the age of one year.

She said she expects the number of cases in the county to continue to grow for some time before shutdowns and social distancing have an impact.

“We do not believe the local wave of COVID-19 cases has yet crested,” said Wooten during the county’s daily press briefing amid the pandemic.

During the briefing, Sheriff Bill Gore said his department is seeking clarification from the state about whether retail gun stores are considered essential businesses. Earlier this week, county officials said they aren’t, and Gore pointed out that Gov. Gavin Newsom’s order does not specifically list them as essential.

“In the meantime, the sheriff’s department is encouraging firearms retailers to socially distance and to close their shops to only online or appointment-only customers,” he said.

Gun owners had reacted angrily to the suggestion that gun stores are not essential, saying county residents need access to firearms and ammunition during what is an uncertain time.

In Los Angeles County, Sheriff Alex Villanueva has said his deputies will ensure that retail gun stores are closed.

These death numbers are interesting. The reports of death for San Diego County this season are the two from COVID-19, and 86 from influenza as of March 11 (probably nearly a hundred now), We know that flu and covid symptoms are nearly the same and that the cause of death requires a test. We also know that they haven't been testing for the most part. So what's true and what isn't? Is the government lying to us? . . .By the way, reported flu deaths are up over last year. Are some of those covid?. .here

I've read that hospitals test first for flu. If you test negative and have severe COVID-19 symptoms, they may then test for that.

But it's possible that some deaths attributed to flu may be people who had both conditions.  There may also be a more severe strain of flu out there.

The reason COVID-19 is a big concern is there is no vaccine, so anyone could get it, and you can be contagioue even without symptoms for a long time, and nobody has any natural resistance to it, either since it is a new disease.  It's also not just affecting the elderly.  Over 2/3 of those hospitalized locally with it are between age 20 and 60.