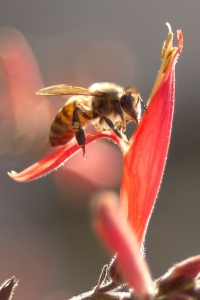 September 8, 2016 (San Diego) – Spraying chemicals to kill Aedes mosquitoes that can transmit Zika virus is being done in communities across the nation where returning travelers have been diagnosed with Zika. But a report in South Carolina of massive bee kills from aerial spraying has raised concerns over how to protect bees from poisoning while also protecting public health from the dangerous Zika virus.

Michael Workman, San Diego County Communications Director, responded to our inquiry and explains what steps San Diego is taking to minimize any risk to bees.

First, South Carolina did aerial spraying, blanketing a broad area. “Our spraying is from the ground and aimed right in to hedges plants etc. It dissipates quickly,” Workman says.

In South Carolina, while most beekeepers were notified, one keeper was missed, Workman says.  That’s where the losses were documented.

“We look for bee boxes and aviaries. We notify even blocks away if we find them,” Workman explains. “Obviously it would be best to spray at night when bees are not out. But this Aedes mosquito is not a night hunter, it’s a daylight species like the bees.”

Beekeepers and those with insects kept outdoors are encouraged to shelter hives and habitats during treatments. Beekeepers are required to register their apiaries with the County’s Department of Agriculture, Weights and Measures to receive advance notice of when a pesticide that may affect bees is applied to blossoming plants in their areas.

Although the chemical used locally pose low risks to people and pets, according to the County, residents in areas where spraying occurs can avoid or minimize their exposure to the pesticide by taking simple steps:

Anyone who does not want their property sprayed can request an inspection. Workman said one property owner in the Mt. Hope area was allowed to avoid spraying after it was determined her property was primarily rocks and dirt outdoors, with no standing water in which the mosquitoes can breed.

Controlling the mosquitoes through spraying is important, health officials say, because Zika virus, if contracted by a pregnant woman, can cause serious birth defects including microcephaly or small skull, severe brain damage, blindness, deafness and seizures in infants.  It can also cause neurological damage in adults, though most cases are mild and most who are infected have no symptoms.

The Centers for Disease Control advises using insect repellant even after returning from a Zika-infested area to avoid transmitting the disease if bitten by a mosquito at home.  The CDC has revised its guidelines and now urges both men and women travelers to refrain from sex or use condoms for at least six months after returning home.