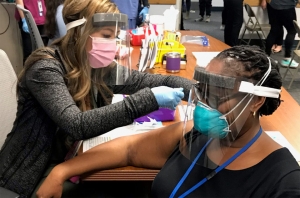 Photo: An employee at the County Psychiatric Hospital gets her first dose of COVID-19 vaccine in December

April 28, 2021 (San Diego) -- The County is resuming vaccinations with the Johnson & Johnson vaccine after the California Department of Public Health gave the green light to do so over the weekend.

Vaccinations with Johnson & Johnson were temporarily paused earlier this month while the U.S. Food and Drug Administration studied adverse reactions in a small number of recipients. The FDA concluded April 23 that the benefits of the vaccine outweigh its risks and approved it for emergency use. Following the subsequent findings of the Western States Scientific Safety Review Workgroup, CDPH approved the vaccine’s usage.

The County of San Diego currently has about 12,000 doses of the Johnson & Johnson vaccine available and will offer them at mobile vaccination sites and walk-up vaccine pods. The single-dose Johnson & Johnson vaccine will also be used to vaccinate homebound individuals and agricultural workers who are often more difficult to reach for a second dose.

Thanks to Johnson & Johnson vaccinations resuming and a steady supply of incoming vaccine shipments, vaccination sites across the County currently have appointments available for the coming days. A new vaccination location, the Linda Vista Vaccine Site at the University of San Diego, opened yesterday. The site will be open from 9 a.m. to 3:30 p.m.

You can research appointment times and locations at www.vaccinationsuperstation.com.

Vaccine recipients will be informed during sign-up which vaccine they will receive, which is standard practice. Those signing up for appointments on MyTurn can see which of the three available vaccines, Johnson & Johnson, Moderna or Pfizer, will be offered to them.

THIS IS NOT MEDICAL ADVICE; I AM NOT A DOCTOR!!!! these are my personal opinions; CONSULT A PROFESSIONAL.

The blood clots were one in a million. The reason, the J&J vaccine was "paused," from what I have read that made the most sense to me and "sounded right," (immediately after they were paused- sorry I don't have the source), was that the J&J vaccine was paused was because the TYPICAL TREATMENT for this rare type of blood clot was DANGEROUS for the ones linked to the vaccine. Doctors needed to be educated on the correct treatment for this rare clot, when it occurs within a couple weeks of receiving the J&J vaccine. Now that word is out, if you get one of these rare blood clots, your doctor won't accidently hurt you with the wrong treatment.

All that said: in my opinion premenopausal women should refuse the J&J vaccine. (the educated hypothesis based on who had these horrible rare blood clots is that the clots may have something to do with women's hormones)

SPECULATION: the Pfizer and Moderna vaccines use very new ("novel,: they call it, same as the "novel coronavirus"), vaccine technology. We only know their effects for one year after use. For vaccine skeptics, J&J uses more traditional methods, so J&J might (oddly enough) actually be the best option for cynics (don't read too much into that LOL).

more speculation: Some people who get COVID have dangerouos blood clots. So something that MIMICS COVID, could it stand to reason that, in some cases, it could have a similar effect as COVID itself? Yes, J&J is much better than nothing, but it's nice to know that even a one in a million chance of something life threatening from these vaccines could cause them to be paused and investigated further. The vaccines are safe. Gov. Newsom even took the J&J vaccine, just because all the other public officials took Pfizer or Moderna, so he made a judgement call to take the J&J vaccine, to set an example and put his money where his mouth is. What a nice civic-minded fellow. It's awfully nice to have a good governor during a pandemic.

God bless you and stay safe.