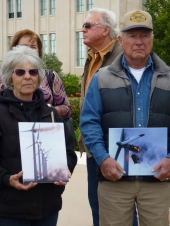 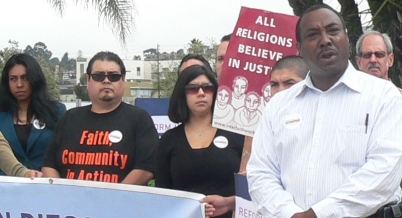 Photos: Rural residents rallied for protection from wind turbines after explosions; faith-based community leaders sought justice for immigrants outside County Administration Building at site that may soon be restricted for free speech rallies.

But under a new ordinance proposed for consideration on Tuesday’s agenda, people wishing to exercise First Amendment rights may be restricted to  designated “free speech zones” at the new Waterfront Park around the building, where you won’t be able to bring a megaphone, microphone, or even a chair on which to sit.  There will be noise limits and gatherings of 200 or more must obtain permits—meaning you’ll have to predict how many will show up for your event, or risk paying fines.

That’s not all.  The proposed ordinance would go farther,  changing codes regarding selling and advertising for all county parks and recreation facilities to regulate “other issues such as commercial photography, noise levels, and the prohibition on posting or affixing materials on park property.”

The nature of those changes is not spelled out in the agenda item.  Does this mean a photographer can’t snap photos  in a public park and later sell those images?  Will event organizers be banned from posting flyers or banners?

The stated purpose for the ordinance is to stop people from using the most heavily used portions of the park, including walkways and recreation areas, which have become popular with people expressing First Amendment speech as well as with tourists and recreational users.  The County claims it wants to assure “a balance of the recreation/civic use of the Waterfront Park and the ongoing business use of the County Administration Center and free speech activities.”

It is unclear why the County didn’t foresee conflicts when it decided to build a water front park (in a drought, with our tax dollars) on grounds long used for free speech activities outside the center of civic government where Supervisors meet to enact laws impacting the public.  Recreational activities can occur anyplace, but the cherished right to rally support or opposition for issues up for a vote before our elected officials are clearly less effective if relegated to an obscure area away from the building’s entrances and places where the public gathers.

The item will be heard by Supervisors Tuesday at the County Administration Building, Room 310 in San Diego. The meeting starts at 9 a.m.  The item is seventh on the agenda.

East County Magazine has contacted the American Civil Liberties Union's San Diego chapter to inquire about the constitutionality of the proposal.  An ACLU representative voiced concern over the matter and indicated the organization will prepare a response.

Lets set a date and have 100,000 of us show up to protest a County Government that builds a multi million dollar water park, in the San Diego City limits, miles from any county resident.
Lets see if, with their 1 BILLION DOLLAR Law Enforcement budget, if they can put ALL of us in jail?
Way past time for the second American Revolution!

Free speech should have been one of the planned uses for the spaces around the County Administration Building and is an important part of the use for our government buildings. Remember the people raising their voices are constituents and entitled to space same as those seeking recreation.