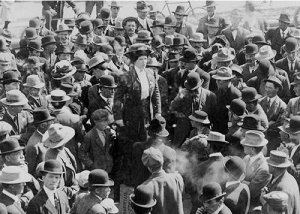 July 16, 2015 (San Diego) – Last month,  the county postponed action on a proposal to create “free speech zones” at the Waterfront Park after objections raised by the American Civil Liberties Union and local activists, as we reported. Now the County has shelved those plans indefinitely, ECM has learned.

Now San Diego Union-Tribune writer Logan Jenkins has published a story  likening the county’s efforts to heavy-handed San Diego tactics back in 1912 to restrict free speech by the Wobblies, or Industrial Workers of the World.  Logan concludes that the county would “do well to drop the notion of speech-related “zones.”

He concludes, “If any group, whether it’s the Girl Scouts or the Minutemen, is lawful and reasonably orderly, it should have fair and equal access to the people’s park. Permit hoops should be the same regardless of content or tone. Even if it’s not intended, any ordinance that appears to unequally isolate certain kinds of assemblies is problematic. It’s an invitation to subjective abuse — and a waving red flag to the ACLU. Sometimes, the best solution to a hypothetical problem is nothing.”

Supervisor Dianne Jacob agrees.  “At this point, I’m not convinced there is a need for an ordinance,” she has told East County Magazine. “We have laws that protect free speech, and we have a reservation system for public and private special events.”

Advocates pushing for the restrictions had argued that despite the long tradition of public protests and rallies outside the County Administration Building where Supervisors meet, the addition of the Waterfront Park outside has led to uses such as weddings and picnics—and that these park users should be protected from the potential intrusion of others exercising free speech rights. But opponents argued this could have a chilling effect on free speech rights and potentially violate the Constitution.

The item had been slated to be heard again by Superivsors on July 21st. However, a spokesperson for Supervisor Jacob's office has informed East County Magazine that this proposal has been tabled "probably permanently" after our coverage prompted public opposition, media scrutiny and concerns over constitutionality of Sueprivsors' ill-fated effort to stifle free speech.