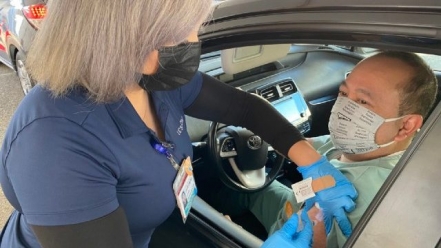 Photo:  A man is vaccinated while in his car at the “super station” downtown. Courtesy County News Center

Supervisor Nathan Fletcher said the county’s goal is to have 70% of the population aged 16 or older vaccinated by the end of July.

But he cautioned that there are far more people immediately eligible for vaccination than the current vaccine supply.

He said the county has received 241,825 doses, but there are 620,000 people just in Phase 1A, which includes healthcare workers and residents of long-term care facilities.

He acknowledged that the state of California is now encouraging everyone 65 and older to get the vaccine, putting additional pressure on vaccine supply. That group represents an additional 500,000 county residents.

“We expect more vaccines to arrive soon, but we don’t know when. And we don’t know how many,” said Fletcher at a briefing for local new media.

Dr. Wilma Wooten, the county’s public health officer, said healthcare providers in San Diego County are slowly opening up vaccinations, beginning with people 65 and older who have underlying conditions that put them at high risk.

Fletcher said the county plans to set up three more vaccination “super stations” like the one that opened Monday at Petco Park. The new centers will be in the South Bay, East County and North County.

“As a county government, we are preparing to spend up to $100 million on efforts around vaccine distribution,” he said, saying he is hopeful that spending will ultimately be reimbursed.