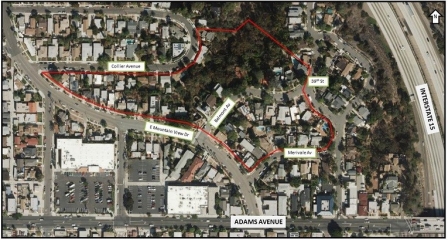 September 8, 2016 (San Diego) -- County Vector Control plans to hand-spray a neighborhood in the Adams North area of Normal Heights this Friday, to kill Aedes mosquitoes to keep them from being exposed to the Zika virus after a resident there tested positive for the virus.

The person recently visited a country where tropical, mosquito-borne illnesses including the Zika virus are active and developed symptoms after returning home. Testing at the San Diego County Public Health Laboratory confirmed the person had the Zika virus, which was not acquired in the U.S.

“It’s really important for people to inspect in and around their homes and dump out any standing water that can give these mosquitoes places to multiply.”

The neighborhood is located west of Interstate 15, north of Adams Avenue, east of 36th Street and south of Alexia Place. Vector Control officials are going door-to-door and leaving door-hanger notifications for residents where spraying will occur.

Aedes mosquitoes can transmit Zika and other tropical diseases if they are exposed to them by biting an infected person. However, to date, no infected Aedes mosquitoes have ever been found in San Diego County or California.

Unlike native San Diego County mosquitoes, the invasive Aedes species prefer to live around people — inside and outside homes and in backyards — and can breed in as little as a thimble-full of water. A female mosquito lays 100 to 300 eggs at a time and can potentially lay 1,000 to 3,000 eggs in its lifetime.

“It’s really important for people to inspect in and around their homes and dump out any standing water that can give these mosquitoes places to multiply,” said Rebecca Lafreniere, deputy director of the County Department of Environmental Health. “They can breed in the trays under flower pots, in holes in trees, in kids toys on your lawn that can collect sprinkler water — anything that can collect water.”

The National Centers for Disease Control and Prevention report that only about 20 percent of people who get infected with the Zika virus ever experience any illness.

However, the Zika virus has been linked to a severe birth defect, microcephaly, a condition where babies’ heads and brains are smaller than normal. County Vector Control are spraying a state-approved insecticide, Pyrenone 25-5, to kill mosquitoes to protect the public.

County officials notified residents in the Adams North neighborhood Wednesday, going door-to-door, telling them about the need to spray and educating people how to prevent mosquitoes from breeding on their property.

The County is not using naled, an insecticide that has been used in aerial spraying in Florida and in South Carolina, where an aerial application killed millions of honeybees last week.

The pesticide the County is spraying by hand, Pyrenone 25-5, is derived from chrysanthemums, poses low risks to people and pets and dissipates in roughly 20-30 minutes. However, the County is instructing residents in areas where spraying occurs that they can avoid or minimize their exposure to the pesticide by taking simple steps:

Vector Control will continue to conduct trapping for Aedes mosquitoes in the area and nearby locations for several weeks.

Two types of Aedes mosquitoes — the Aedes aegypti, yellow-fever mosquito and the Aedes albopictus, Asian tiger mosquito — were found in San Diego County for the first time in 2014 and 2015.

They are smaller than native mosquitoes, have distinctive black and white markings, are known as aggressive biters and — unlike our native mosquitoes that prefer to feed between dusk and dawn — like to bite and feed during daylight hours as well.

County officials reminded the public that they can protect themselves from Aedes and native mosquitoes by following the County’s “Prevent, Protect, Report” advice.

Report if you are being bitten by mosquitoes during daylight hours, or if you find mosquitoes that match the description of Aedes mosquitoes by contacting the Vector Control Program at (858) 694-2888.

Information about the Zika virus, chikungunya, and dengue and can be found on the National Centers for Disease Control and Prevention’s website.

For more information about mosquito-borne illnesses virus, go to San Diego County’s “Fight the Bite” website. The County has also released the public service announcement below to promote mosquito prevention.