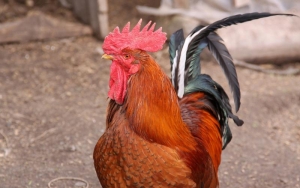 August 27, 2018 (San Diego) - It hasn’t shown up here in San Diego County yet, but County Agriculture, Weights and Measures officials are urging backyard bird owners to be on the lookout for a highly contagious bird-killing disease: virulent Newcastle disease.

Virulent Newcastle is a contagious, deadly bird disease that has wreaked havoc on commercial poultry operations in California in past decades. It is not harmful to people, although in rare cases, people who are exposed to it develop mild cases of fever and/or eye inflammation. People also cannot contract it by eating infected poultry. It has not been found in any commercial poultry in California and it has not been found in San Diego County.

However, state and federal agriculture officials have found the disease in backyard poultry in four counties — Los Angeles, Riverside, San Bernardino and last week, in Ventura — since May.

Birds spread the disease to each other through direct contact, saliva and feces.

“So far, this disease has only shown up in backyard birds,” Dang said, “and it is very important for bird owners to call the state’s hotline if they notice virulent Newcastle symptoms in their birds. This will help prevent a possible spread of the disease into commercial poultry where it could seriously hurt commercial producers and increase product costs for consumers.”

Because virulent Newcastle disease is so contagious and so dangerous to bird flocks, and because there is no cure for infected birds, the backyard flocks that have been found have been quarantined and many euthanized.

A major outbreak of virulent Newcastle disease in the 1970s in commercial chickens in California caused nearly 12 million birds to be destroyed, cost taxpayers $56 million and increased poultry product costs for consumers.

Symptoms of virulent Newcastle disease include:

For more information, go to the California Department of Food and Agriculture’s Virulent Newcastle Disease webpage.