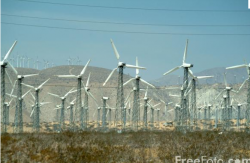 August 2, 2012 (San Diego’s East County)—On Wednesday, August 8, San Diego County’s Board of Supervisors are expected to hold hearings on two controversial projects in East County.  Supervisors will weigh whether to overturn a Planning Commission recommendation not to approve five industrial wind turbines on private land as part of the larger Tule Wind project in McCain Valley.

The Board is also expected to hear an appeal filed by residents asking Supervisors to reject the Planning Commission’s approval of the Energia Sierra Juarez cross-border Gen Tie (power lines) major use permit.

The power lines, capable of carrying up to 1250 MW, will hook into the Eco-Substation in East County—all part of what developers are calling an “energy mega-region” here. Opponents contend that approving the project opens wide the door for multiple massive energy projects in East County as well as enabling a massive wind project in Mexico. For  our past coverage of the Planning Commission’s decision on the Energia Juarez cross-border transmission lines, see http://eastcountymagazine.org/node/9989.

Tule Wind, touted as renewable energy to help meet the state's goals for reducing greenhouse gas emissions, has generated substantial controversy. The project has support from labor and some business groups, but has generated broad opposition from community groups, environmental organizations and Native American tribes over issues including sensitive habitat and cultural resources, noise, health and fire concerns.

Potential loss of revenues from tourism, sales tax and property taxes is another consideration.  Anza Borrego  Foundation warns that the destruction caused by Ocotillo Express wind adjacent to Anza-Borrego Desert State Park may cause the park and local businesses  as much as $30 to $120 million dollars in lost revenues, with  potentially large losses to San Diego County from sales tax revenues as well as lost property tax revenues due to plummeting property values near the facility.

In addition, the risk of wildfire has been made apparent in the past month, with wind turbines at two Southern California facilities causing fires, including a 367-acre wildland fire in Riverside County and a smaller fire at Tehachapi.  A turbine at a facility built by Iberdrola Renewables, the same company that seeks to build Tule Wind, caught fire in 2009 at its Locust Ridge project in Pennsylvania.  Other recent turbine fires include North Allegheny Ridge in Pennsylvania and a wind turbine battery fire that destroyed a battery facility in Kahuku, Hawaii  yesterday, to name just a few recent conflagrations linked to wind energy.