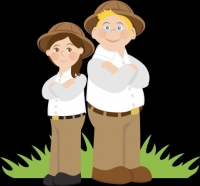 October 9, 2011 (San Diego)--Now, learning how to “Fight the Bite” and protect yourself from West Nile virus can be fun, says the San Diego County Department of Environmental Health. The agency has created a new website, http://www.SDSwatTeam.com, and two specially-created video games to let kids (and even adults) play while learning about protecting themselves and others from West Nile virus, the potentially-deadly disease that is spread by mosquitoes.

“This is something we can use in libraries, schools and in homes to give kids a fun way to learn about preventing West Nile virus,” said Supervisor Greg Cox. “Reaching out to kids is especially important because they often play outside where they are vulnerable to mosquitoes that can carry the disease.”

The first game, “Hazard Hunt,” asks kids to help Hannah and Hector, the County vector inspectors (vectors are pests that can transmit diseases) hunt for 12 common places around the home where mosquitoes can breed. Players use their computer mouse to find breeding spots and answer multiple-choice questions about mosquito prevention. When the player answers all 12 questions correctly, they become a SWAT team member and win an official certificate or a SWAT team robot they can cut out and put together.

The second game, “Mosquito Munch Maze,” lets players use the arrow keys on their computer to help a mosquito fish swim through a maze and “gobble up” his favorite food, mosquitoes. Winners also become SWAT team members and get to print out a certificate or robot.

However, the disease, which is mainly spread to humans by mosquitoes who feed on infected birds, remains a threat. There have been 88 human cases in California this year and two Kern County men became the state’s first West Nile virus fatalities this week. Nationwide, there have been 362 human cases and 18 deaths in 2011.

To find the new “Swat Team” page and more information about West Nile virus and how to prevent its spread, go to http://www.SDFightTheBite.com.