May 17, 2018 (San Diego) -- Water rate increases proposed by the San Diego County Water Authority staff for 2019 are among the smallest in the past 15 years due to financial benefits secured through litigation against the Los Angeles-based Metropolitan Water District of Southern California and the Water Authority’s planned use of its Rate Stabilization Fund. 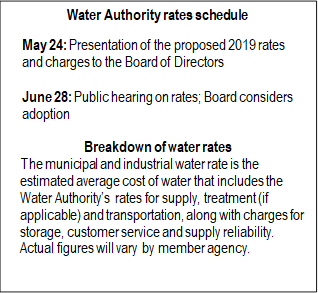 Rates charged to the Water Authority’s 24 member agencies across out region would increase by 0.9 percent for treated water and 2.9 percent for untreated water in calendar year 2019, according to a proposal to be presented to the Water Authority's Board of Directors on Thursday, May 24. The Board is scheduled to hold a public hearing on the proposed rates and consider their adoption during its regular meeting on June 28. The new rates will take effect on January 1.

Key factors influencing the 2019 rate proposal include regional water demand that’s expected to remain below earlier projections; increasing deliveries of independent and more reliable Colorado River water supplies from the Imperial Irrigation District; a proposed change to a financial reserve policy; and lowered costs from MWD because of a 2017 Court of Appeal ruling that favored the Water Authority on several key points.

Tangible results produced by the rate-case litigation include allowing San Diego County ratepayers to keep millions of dollars at home every year instead of paying illegal charges to MWD. In addition, the litigation provided other benefits to the Water Authority that aren’t factored into the 2019 rates, such as an increase of approximately 100,000 acre-feet per year in preferential rights to MWD water.

Prudent financial management by the Water Authority also helped keep the proposed rates near the low end of the agency’s long-term projections. For 2019, the Water Authority plans a draw of approximately $18.4 million from its Rate Stabilization Fund, which was created in 1990 to help avoid rate spikes, especially those driven by reduced water sales.

As part of the budget package, Water Authority staff is proposing to reduce the target balance of the Rate Stabilization Fund from approximately $147 million today to about $90 million in 2021 and following years. Carollo Engineers, a nationwide water consulting firm hired by the Water Authority, recommended the change because engrained regional water-use efficiency practices mean water sales are not likely to drop as sharply as they did in the past even under drought conditions. By using those reserves to defray some costs over the next two years, the fund balance will reach the proposed new target range.

The 2019 rate and charge proposal was developed in conjunction with a comprehensive cost-of-service study by Carollo, which concluded that the Water Authority’s methodology is in full compliance with Board policies, state law and industry standards. The review process included extensive discussions with member agency staff about rate assumptions and calculations, along with training to help them understand the Water Authority’s rate model.

“Transparency is a critical component of setting rates,” said Maureen Stapleton, general manager of the Water Authority. “By making our member agencies even more integral to the planning process, we not only could explain the rationale behind our calculations but make refinements along the way.”

The Water Authority proposes charging its 24 member agencies the municipal and industrial rate of $1,617 per acre-foot for treated water, or $14 more than in 2018. The Water Authority proposes charging $1,341 per acre-foot for untreated water in calendar year 2019, or $38 more than member agencies currently pay.

The actual figures will vary by member agency based on each agency’s fixed-charge allocations. Each member agency will incorporate costs from the Water Authority into the retail rates it charges to residents, businesses and institutions. (Note: An acre-foot is about 325,900 gallons, enough to serve 2.5 typical four-person households in San Diego County during normal water-use conditions.)

Proposed 2019 rates are influenced by the current era of reduced water sales, which are expected to be slightly lower than 2018 and about 9 percent below levels at start of the most recent drought in 2012. Decreased water sales put upward pressure on rates because costs must be spread across fewer units sold.

In addition, Water Authority costs have risen because of a scheduled 30,000 acre-foot increase in independent and more reliable Colorado River supplies secured by the Water Authority through the 2003 Water Conservation and Transfer agreement with the Imperial Irrigation District. This increase added $11.6 million to the total cost of water in 2019. Deliveries of IID supplies will continue to ramp up through 2021 until the transfer volume is stabilized at 200,000 acre-feet per year. In addition to the IID transfer supplies, the Water Authority receives approximately 80,000 acre-feet per year of water conserved through the Water Authority’s investments a decade ago to replace the earthen All-American and Coachella canals in the Imperial Valley with modern, concrete-lined canals. The IID transfer and canal lining projects were the cornerstone of the 2003 Colorado River Quantification Settlement Agreement that settled decades-long disputes over the use of Colorado River water in California.

For more information about the Water Authority’s proposed rates, go to page 27 of the May Board packet at www.sdcwa.org/monthly-board-meeting-80.