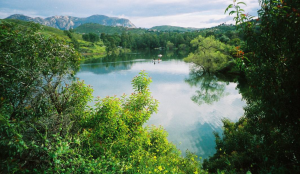 The Water Authority is the lead agency under the California Enviornmental Quality Act (CEQA) and seeks to adopt a mitigated negative declaration (MND) for application of the algaecides.  The treatment may require temporary exceeding of levels allowed for copper in drinking water.

The draft MND can be viewed at http://www.sdcwa.org.

Algae blooms cause taste and odor problems in your drinking water and are difficult to remove in the water treatment process. Copper sulphate has been used for many years to control algae growth as the water warms in the springtime. It's spread around the lake but not close to the intake to the treatment plant.
If it wasn't applied your tap water would smell bad,. It's a powerful oxidizer but doesn't get to your home.