Updated with statement from MWD

June 21, 2017 (San Diego) – The 1st District Court of Appeal today issued a ruling in favor of the San Diego County Water Authority on key points in its lawsuits against the Los Angeles-based Metropolitan Water District of Southern California.  The County Water Authority has charged that MWD rates charged are illegal. The case is expected to be appealed to the California Supreme Court, where if upheld it would mean a big win for San Diego County ratepayers.

Mark Muir, Chair of the Water Authority’s Board of Directors, issued this statement on the decision:

“One key ruling is that the Water Authority is entitled to tens of thousands of acre-feet more water from MWD than MWD had calculated under its preferential rights formula – a benefit valued in the hundreds of millions of dollars based on payments made by the Water Authority. Another is that MWD collected millions of dollars in illegal charges from San Diego ratepayers.  MWD used this money to fund local supply and conservation projects for other MWD member agencies.

“The court ruled against the Water Authority on one important issue with implications for ratepayers and taxpayers statewide – essentially, whether MWD must base its rates on the costs it actually incurs in providing its various services. We believe that the California Constitution, state law and voter-approved Proposition 26 compel MWD to do so – and the trial court agreed. MWD argued that it’s above the law, and convinced the Court of Appeal to reverse the lower court ruling on this key finding. We are also concerned about the chilling effect this ruling could have on water transfers and their benefits for the environment.

“With so much at stake, we expect that both the Water Authority and MWD are likely to seek review from the California Supreme Court of various aspects of today’s decision. The state Supreme Court has discretion to hear a further appeal of any issues decided by the Court of Appeal.

“When we filed the first-rate case lawsuit in 2010, we knew that this would not be a sprint. It’s a marathon that we are running on behalf of – and with the strong support of – our region’s ratepayers, business leaders and elected officials. While today’s ruling secures several important victories for the Water Authority and its ratepayers, we are no less determined to see this case to a successful conclusion.”

NOTE: Additional information about the rate case, including today’s ruling, is at www.sdcwa.org/mwdrate-challenge. 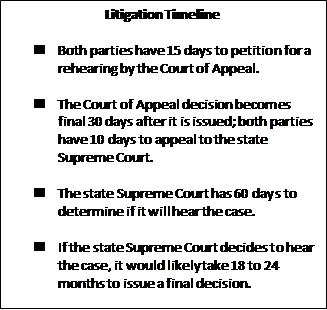 Jeffrey Kightlinger, general manager of the Metropolitan Water District of Southern California, issues the following statement on the decision by the California Court of Appeal on two lawsuits by the San Diego County Water Authority challenging Metropolitan’s rate structure.

“This ruling by the three-justice panel of the California Court of Appeal scores a major legal and financial victory not only for Metropolitan, but for the district’s cooperative of member public agencies as well as the millions of consumers they serve. We are gratified that the court sided with Metropolitan on the central issue in this case, finding “the California Aqueduct unquestionably is an integral part of the system by which Metropolitan transports water to its member agencies” and it is lawful for Metropolitan to recover its State Water Project conveyance costs in its wheeling rate and the transportation rates charged under its exchange agreement with San Diego County Water Authority.

“The Water Authority’s years-long effort to shift costs relating to their own water supply onto ratepayers elsewhere in Southern California has failed. We are equally pleased the court upheld Metropolitan’s full service rate—which represents the vast majority of Metropolitan’s revenues—including our ability to fund projects advancing conservation and local resource development through that rate.

“In the end, years of litigation brought by the Water Authority and tens of millions of dollars in related costs borne by ratepayers have fundamentally changed no major aspect of Southern California water management or financing. While Metropolitan has prevailed as to the overwhelming majority of costs under challenge in this litigation, nobody is a winner when water districts decide to fight in court rather than resolve their differences in a democratic and collaborative fashion.”

On May 10, 2017, the 1st District Court of Appeal heard oral argument in the appeals of the Water Authority’s victories in two lawsuits against MWD.

Superior Court Judge Curtis E.A. Karnow ruled in November 2015 that MWD’s rates for 2011-2014 were illegal. The judge directed MWD to pay the Water Authority more than $243 million in damages, costs, pre-judgment interest and attorneys’ fees – the largest plaintiff’s award in the state for 2015. If MWD were allowed to continue its unlawful rate-setting practices, which are not based on the cost of services MWD provides, overcharges to the Water Authority could exceed $7 billion over 45 years.

MWD appealed Judge Karnow’s final judgment and refused to change its rates. In addition, the Water Authority asked the 1st District Court of Appeal to review Judge Karnow’s ruling that the agency doesn’t have standing to challenge MWD’s “Rate Structure Integrity” contract clause (also known as “RSI”), which is designed to punish MWD member agencies that contest MWD rates in courts or the state Legislature. The Water Authority contends the RSI clause is an unconstitutional constraint on the Water Authority’s right to petition the courts and exercise free speech, and an unlawful attempt to immunize MWD against illegal, predatory water rates.

The Water Authority filed its initial rate lawsuit against MWD in 2010, then filed a second suit in 2012 because MWD refused to reform its rates, which are not based on the cost of the actual services MWD provides, as required under California law and the state Constitution. A third Water Authority lawsuit was necessary to challenge the MWD rates set for 2015 and 2016, and a fourth to challenge the MWD rates set in 2016 for 2017 and 2018. The third and fourth cases are currently stayed pending resolution of appeals in the first two lawsuits.