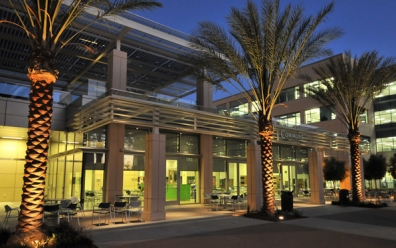 October 8, 2018 (San Diego) - The County of San Diego has become the first county in California and the second in the nation to receive the U.S. Green Building Council’s Platinum certification – its highest distinction – in its LEED for Communities program.

LEED stands for Leadership in Energy and Environmental Design and was created by the U.S. Green Building Council. LEED is considered the world’s most widely used green building rating program. Many County buildings have won various levels of LEED certification including Platinum for the County Operations Center conference center, 30 housing units at San Pasqual Academy and the San Elijo Nature Center.

The LEED for Communities award was presented to Board Chairwoman Kristin Gaspar by U.S. Green Building Council President and CEO Mahesh Ramanujan during the supervisors’ meeting Tuesday. 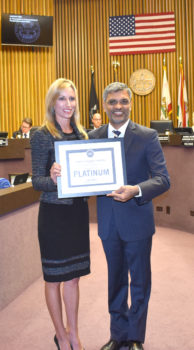 The award is given to communities or cities that achieve the highest measured performance in key areas of human and environmental health, including energy, water, waste management, transportation, education, health, safety, prosperity and equitability. As part of the review, the County’s climate action, strategic energy and waste diversion plans were compared nationwide. The County reached high performance scores in energy, waste and transportation.

In recent years, the County has permitted 13 large-scale renewable energy projects and issued over 25,000 residential and commercial solar and wind permits. The County has installed 79 electric vehicle charging ports at County facilities and transitioned over 1,000 vehicles to hybrid and alternative fuels.

The County also approved a zero-waste plan in April 2017 with a goal to boost the current 62 percent waste diversion rate to 75 percent by 2025.

In the area of facilities, the County aims to reach a LEED rating of gold or higher for all new construction. It also pursues zero net energy for new facilities, meaning they generate more energy than they consume when measured over a year. So far, 77 buildings have achieved LEED certification and two libraries are zero net energy.