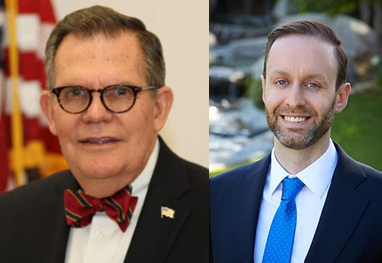 With only two candidates in the nonpartisan race, whoever receives more than 50 percent of the vote on June 5 will be declared the winner.

While the office of County assessor-recorder-clerk typically draws little public attention, every county resident who owns property or rents is affected by what happens there. The office oversees assessing the value of real estate and personal property, and property taxes constitute the largest share of revenue for the county.

The office also involves registering business names and issuing marriage licenses, birth and death certificates. The office has a $71 million budget with 405 employees and five offices in San Diego County. Dronenburg said his department has returned an average of $3.2 million of his annual budget to the County general fund. His office is forecasting a return of more than $5 million in 2018.

Dronenburg was first elected to the office in 2010 and re-elected in June 2014. Dronenburg’s track record includes lowering property values, which provided tax relief to hundreds of thousands of homeowners so they could remain in their homes. Soon after taking office in 2010, Dronenburg reduced property taxes on more than 310,000 properties in San Diego County. At the time, the housing market was still reeling from impact of the economic recession and many homeowners had lost value in their homes.

Dronenburg also is known for implementing technology innovations to his department to allow more online forms transactions. San Diego was the state’s first county to implement a document e-recordings system with secure electronic signatures. A document digitalization program saves the printing of more than 650,000 pieces of paper annually, Dronenburg said.

He drew controversy in 2013 when he initially refused to issue marriage licenses to same-sex couples following legalization, contending such marriages should not be performed until conflicting state and federal rulings were resolved. When California’s Supreme Court rejected that argument, Dronenberg’s office did comply and perform same-sex ceremonies. He later won reelection by a 28-point margin.

Dronenberg has also drawn media scrutiny for over 100 trips to resorts in California during a five-year period, costing taxpayers over $90,000.  Dronenberg has defended the trips to conventions and trad association meetings, saying information he learned there helped him save the county millions of dollars through the years.

He touts a 98.3% positive customer service survey rating and a 4 ½ star rating on YELP, which he attributes to “changing the department culture to put customers first.” He also says he has returned an average of $3.8 million of his department’s annual budget to the county general fund.

“I feel that qualifications and experience matter and I’m the only candidate with the knowledge to understand the technical nature of property taxes to protect homeowners and the certification necessary to legally hold the office,” said Dronenburg. “I’ve been successful with implementing technology innovation and bringing the private sector revolution to the public office.”

Strabone states, “We deserve a government that works for us, that’s transparent and accountable, that provides excellent service and that saves San Diegans money.”

He says his goals include making the office more user-friendly and improving access to records by posting more documents online and reducing or eliminating the $2 a page fee. He also says some 150,000 county residents aren’t getting all the tax exemptions they deserve, and adds that he wants to help them lower their property taxes.

His website takes shots at his opponent, stating his goals include “eliminating corruption” and never using the office to enrich himself or misuse taxpayer money. Strabone also says he stands for “ending bigotry,” adding, “We will always serve all the people of our county, no matter who they are or who they love, equally and with an open heart.”

He does not hold an appraiser’s certificate, which is required for the job. However, state law allows candidates to apply for the credential within 30 days of taking office.  He says that in his law practice representing charities, “It’s my job to review the valuations and appraisals of donated property for tax reporting purposes,” the San Diego Union-Tribune reports.

50% tax increase in Alpine... 3 years in a row? (I must be sitting on a gold mine?) The Hoops and Loops are an intense challenge to challenge them.Don't put a chicken coop on or your PT will go up? or a shed? It just mite be time for a change? Take the old guard out and put a younger person that understands data gathering and making the world we live in now easier to traverse (the PC crew will love that younger person comment!) but in reality some of these people have been in positions before the internet? Did you know not even a High School Diploma is necessary to run for Congress or the Senate? or President of the United States? ( Left Wing (Target) sorry)