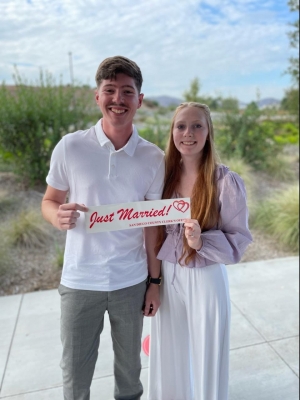 July 27, 2022 (Santee) "Love" after-hours wedding ceremonies, or appointments to get married, are now offered for two upcoming Wednesdays from 5 p.m. to 7:30 p.m. at four locations at the County of San Diego Recorders in Chula Vista, Santee, San Marcos, and downtown. The next two dates for late appointments are August 10 and September 14.

Or, as Jordan Z. Marks, Esq., Assessor Taxpayer Advocate said, “Happiness begins here.” And, it did for couples like Peytan Teets and Samantha Wartelle who selected the first late appointment on July 20. Marks was on site to congratulate the newlyweds.

Teets, 21, a US Marine stationed in Oceanside, and his college student fiancée, now wife, Samantha Wartelle, 22, both residents of Texas, took advantage of the late appointments and selected the Santee location.

“I was just looking for a late appointment,” said the groom. Teets booked the appointment a week before the ceremony. The couple chose to have their ceremony outside. The late appointment delivered cool, comfortable temperatures for the service. 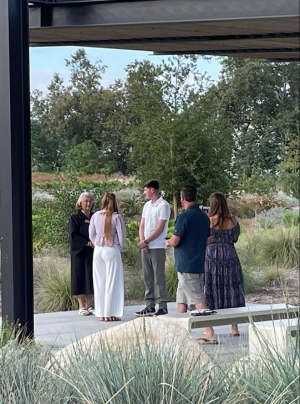 The groom’s father and mother, Jason and Jaime Teets, flew in from Texas to witness and celebrate the young couple’s wedding.

“I think it (the late appointments) are great because it gives family and friends an opportunity to be a part of it. You don’t have to take off work,” said Jason Teets.

A chapel like room is also offered if a couple prefers to wed inside.

“We’re always looking for new ways to provide great customer service,” said Marks on how the after-hours services came about. Marks also noted that the late services pump money into local communities after the ceremonies with couples typically going to dinner in the area after their nuptials.

“We added 180 appointments,” said Marks. That figure included all of their four locations.

The late appointments can also be used to pick up a marriage license. Additionally, the Santee location offers ample, free parking.

The cost of a non-confidential marriage license is $70. The ceremony can be performed by County staff in English and Spanish (for $88). The first step for the Teets was filling out the marriage license and then proceeding with the ceremony. Rings for as little as $10 are also available according to staff.

Couples trickled into the Santee building in a timed fashion---awaiting their ceremonies.

The downtown and Santee locations have guest lounges.

Visit their website: www.SDARCC.com or call (619)237-0502 for more information. It is recommended that couples complete their marriage license online, ahead of their appointment time.