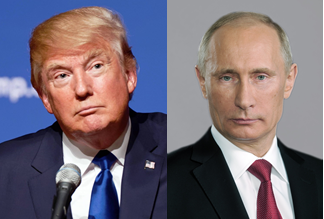 May 11, 2017 (Washington D.C.) -- President Trump’s May 9, 2017 letter firing now-former FBI Director James Comey in part reads, “I greatly appreciate you informing me, on three separate occasions, that I am not under investigation[.]”

However, a recent court filing by the Department of Justice on behalf of the FBI in an ongoing FOIA lawsuit plainly indicates the FBI has an active investigation pertaining to Donald Trump’s actions related to actual or potential election-related hacking and espionage by Russia.

On August 18, 2016, Shapiro and Leopold submitted a FOIA request to the FBI seeking “disclosure of any and all records, including investigative records, mentioning or referring to Donald J. Trump’s statement on 27 July, 2016 [regarding Secretary Hillary Clinton's State Department emails], ‘Russia, if you’re listening, I hope you’re able to find the 30,000 emails that are missing,’ and ‘I think you will probably be rewarded mightily by our press.’”

When the FBI did not respond in a timely manner to the FOIA request, Shapiro and Leopold sued. During the lawsuit, the FBI initially asserted that it could neither confirm nor deny the existence of documents responsive to this FOIA request.

However, the FBI subsequently withdrew this position and agreed to search for the requested documents. Again, the documents requested by Shapiro and Leopold are records, including investigative records, mentioning or referring to a public statement made personally by Donald J. Trump, not his advisors, surrogates, or campaign staff.

In a court filing in this case on April 6, 2017, a Justice Department attorney representing the FBI informed the Court that there is an “active, ongoing investigation” pertaining to this matter and claimed that disclosing the “records that are responsive to the Russia Request” could reasonably be expected to interfere with “enforcement proceedings.” (As noted elsewhere in the DOJ/FBI’s new filing, the term “Russia Request” refers explicitly to Shapiro and Leopold’s FOIA request quoted above.) The DOJ/FBI’s new court filing acknowledges the existence of records responsive to Shapiro and Leopold’s “Russia Request”, and claimed that all, or virtually all, of these documents cannot be released because of the potential to interfere with active law enforcement proceedings.

On April 7, 2017, the Court set a deadline of July 25, 2017 for the FBI to file a motion explaining the basis for its claim that release of documents responsive to "the Russia Request" would interfere with an ongoing law enforcement operation.

The lawsuit is Case 1:16-cv-01827-KBJ. It is being heard in the United States District Court for the District of Columbia.

Fake news fitting for a fake president. First, the GOP wants to slash healthcare; then they want to attack Social Security. They cut off Planned parenthood, and free school lunches. Now Bozo plans on lowering taxes on the wealthy and big business; pushing the burden onto the middle class. ARE THEY EVEN HUMAN?

'What is wrong with you?': Michelle Obama savages Trump for gutting her legacy
https://www.theguardian.com/us-news/2017/may/12/michelle-obama-trump-sch...
.

Let it go. Hillary lost. Get over it. How long are we going to have to read about this fake news.

the is used to distract the rubes and keep the Republic divided. sacramento uses it to raise taxes on the poorest residents , they are abusers or children, the elderly, the middle class and ALL people who are being taxed to fund the totalitarian dreams of the abuser in chief in california jerry brown
too bad the press doesn't talk about new taxes that are going directly into pensions for the same unions who fund the demoncrats