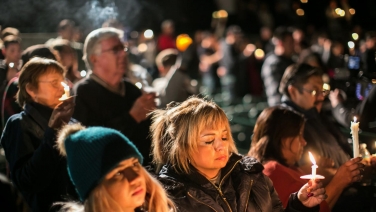 Voters passed the gun control initiative with 63% approval after the deadly San Bernardino terrorist attacks. It bans possession of magazines that can hold over 10 rounds of ammunition.  Sale of such large-capacity magazines has been illegal since 2000.

Some law enforcement agencies report that despite the new law slated to take effect July1st, few people have turned in the banned ammo, opting to hold onto it in hopes that litigation would overturn the ban, the Los Angeles Times reports.

Plaintiffs in the case include gun owners from the San Diego area as well as the California Rifle and Pistol Association, the NRA affiliate in California.

Judge Benitez wrote that without the injunction, “hundreds of thousands, if not millions, of otherwise law-abiding citizens will have an untenable choice: become an outlaw or dispossess one’s self of lawfully acquired property.”

However, a separate court in the Eastern District of California earlier denied a similar motion in a second lawsuit.

The case before Judge Benitez argues that the ban violates the 2nd Amendment of the U.S. Constitution as well as the right not to have property seized without compensation or due process. ”Banning magazines over ten rounds is no more likely to reduce criminal abuse of guns than banning automobiles,” the suit contends.

To cite just a few examples:   In 2016, 49 people lost their lives and another 58 were wounded inside Pulse nightclub in Orlando, Florida. In 2015, 14 people were killed and 22 people were severely injured at the Inland Regional Center in San Bernardino, California. In 2012, 20 children were fatally shot, as well as six adult staff members, at Sandy Hook Elementary School in Newton, Connecticut. In 2011, six citizens died and an additional 15 were wounded outside a supermarket in Tucson, Arizona.

“Each of these horrific incidents were made more traumatic by the existence and use of large capacity magazines,” California’s Attorney General says. “Studies have further concluded that when large capacity magazines are used, the average number of people shot is 2.5 times higher, and the average number of people killed is over 60 percent higher.”

Becerra adds, “Restricting large capacity magazines and preventing them from ending up in the wrong hands is critical for the well-being of our communities. I will defend the will of California voters because we cannot continue to lose innocent lives due to gun violence.”