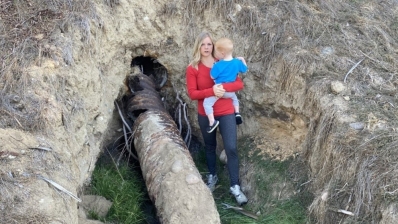 Photo of Taylor Farson with damaged pipeline on her property, via GoFundMe by Shawn Farson

July 19, 2022 (Lemon Grove) — After a two year campaign, a group of neighbors have won a lawsuit that rules the City of Lemon Grove take responsibility for repairing a treacherous backyard drainage pipe.

The storm drain pipe is corroded, split in seams, and has been spouting runoff water from the nearby streets into the shared backyards of the Farson and Legge family homes. The water has eroded the land surrounding the pipe, causing perpetual sinkholes that encroach on the properties with every rainfall, posing both material damage and risk of injury to young children living in both households.

The problem is clear, but the question of who must solve it — a decade-long cash-strapped city or its cash-strapped residents — has now crescendoed to the San Diego County Superior Court in an expensive legal battle, with fees approximated at 500 thousand dollars per side.

“We are not the first homeowners that this has happened to and surely won’t be the last,” wrote Taylor Farson in a GoFundMe post, her family’s means of raising legal fees once costs began to surpass the capacity of their savings, assets, and family support combined. Yet as they potentially faced even costlier damage to their homes, the cause was worth a fight.

“We are hoping to win this lawsuit to not only fix our damage, but to help others who might be experiencing a similar issue as well,” she continued. “If the City is found liable, it’s a win for every member of our community and it will set a new precedence for all residents of Lemon Grove.”

The pipe is a part of the City’s storm water system along Amber Place and Cedral Place, but any burden attached to this use of the pipe has been denied, as the City claimed it does not "own, control, or maintain the storm drain pipe at issue,” according to reporting by CBS8 on the issue. According to the Farsons, fixing the issue would run about 550 to 850 thousand dollars.

"It's terrifying,” said Shawn Farson to NBC7. “Quite truthfully we know every time a storm comes through here we risk further damage in our backyard and as that encroaches closer to our home we fear that our home value is being washed away with the storm.”

The issue was tossed back and forth between the neighbors and the City — that is, until June 28, when Superior Court Judge Joel Wohlfeil weighed in, siding with the neighbors.

In the decision, he ruled that while no formal storm water agreement covers the area, municipal oversight of the pipe is implied, and under that implication, the lack of action by the City constitutes liability.

“[The City] chose to adopt a ‘wait until it breaks’ plan of maintenance to save on the costs of monitoring and repairing its aging, failing drainage system,” wrote Wohlfeil. “The damages to Plaintiffs' properties were caused by the inherent risks of Defendant's maintenance plan. Plaintiffs should not be expected ‘to shoulder the burden alone.’”

“I knew from day one that what the City was doing to us was wrong,” said Shawn Farson after speaking at a Lemon Grove City Council meeting on July 19. “We finally had our day in court last month, and the Judge has spoken.”

Wohlfeil’s ruling marks a major victory for the Farsons and Legges, who jointly filed the lawsuit almost two full years ago on August 24, 2020.

"Having been fully stretched to the limits of our financial ability, and facing possible bankruptcy and the loss of our home, I cannot be more pleased and prouder to have stood up to the City’s unreasonable and oppressive effort to make me and my family pay to drain the city streets,” said Rosalinda Legge to CBS8.

“It’s very surreal,” agreed Shawn Farson, also to CBS8. "It took a day or two for it to sink in but I’ll tell you, I feel very blessed right now that we were able to win this, the long fight, long and drawn out over two years, many, many sleepless nights wondering how this was going to end and I just feel so relieved for myself, for my family," said Farson. "We couldn’t be happier.”

The City of Lemon Grove, which has refrained from comment on the matter due to it being current litigation, filed official objections on July 14 to the Superior Court ruling.

In the document, the City claimed the court’s decision is too ambiguous to find them liable, and rejected the idea that their responsibility of the pipes in question is implied, among other objections on trial details.

The Court will hear arguments for all objections, as well as schedule the next phase of the trial, on August 12, 2022 at 3:00 p.m. It remains to be seen whether the City will settle with the families, extend legal proceedings, or outright appeal the decision.

The families — who were originally told by the City that a lawsuit would get thrown away by any judge immediately, according to Shawn Farson — are now confident in Judge Wohlfeil’s decision standing strong. Still, they continue to implore the City to accept liability and work with them to end the lawsuit.

“I am here today, pleading with you, that you put an end to our suffering and not drag this out any further,” said Shawn Farson as he wrapped up his comment at the July 19 meeting, his own family plus the Legges in attendance behind him. “Instead, I’m asking that you work with us on a settlement so that we can all move forward.”