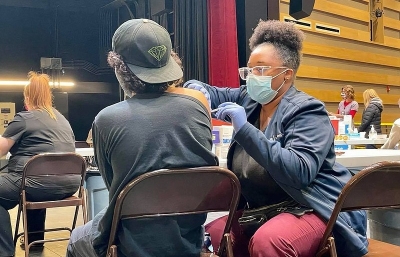 Update: An appellate court has lifted the injunction, allowing the vaccination mandate to remain.

Photo:  A San Diego Unified student is vaccinated in school. Courtesy of the district

The court said the injunction would be in place until the school district removes an exemption for pregnant students. The exemption is allowed even though the vaccines have been shown to be safe for pregnancy.

Judge Sandra Segal Ikuta noted in the order that the district treats students “seeking relief from the vaccination mandate for secular reasons more favorably than students seeking relief for religious reasons.”
A 16-year-old Scripps Ranch High School student and her parents had sued to block the mandate, citing a religious objection because the vaccines were developed in part from stem cell lines derived decades ago from aborted fetuses.
The district’s plan requires that all students over age 16 receive their second dose no later than Dec. 20. According to the family’s filings, that means students’ first dose must be received by Nov. 29 in order to be considered fully vaccinated by Dec. 20.
"Although the case is still in its early stages, this is a significant victory. SDUSD should promptly revise its policy to include religious exemptions for students,” said Paul Jonna, a Rancho Santa Fe attorney representing the family in partnership with the conservative Thomas More Society.
Under the policy, unvaccinated students 16 years or older would be required to take part in remote learning via independent study.
The court’s injunction will be terminated if the deferral option for pregnant students is removed, which an attorney representing the school district said is already underway.
Mark R. Bresee, an attorney handling the case for SDUSD, said the district has already taken action to remove the pregnancy deferral option and thus expects the injunction granted by the court “to be terminated soon.”
Bresee also said the district has not received any pregnancy deferral requests, “so the action did not impact any students and, at any rate, the plaintiff is not seeking a deferral but is seeking to be exempted from the mandate.”
Bresee said that with the pregnancy deferral option addressed, the court “signaled that its full opinion will confirm that plaintiffs are unlikely to succeed on the merits…”
The attorney said SDUSD’s mandate was modeled after existing state law and backed by case law.
“The district’s position is that its carefully and narrowly-crafted student vaccine mandate is constitutional based on current Supreme Court precedent,” Bresee said.