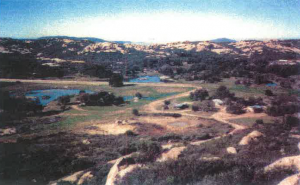 November 11, 2015 (Alpine)—An appeal by neighbors and two additional requests for permission to file appeals to the County’s stipulated administrative enforcement order authorizing Covert Canyon to conduct firearms training for military, government and law enforcement at its Alpine property.  The requests for appeals will be heard as item 5 on the Planning Commission agenda Friday, November 13.

The formal appeal was filed on behalf of Clark F. and Robin Williams, neighbors with property adjacent to Covert Canyon.  View the Williams appeal (parts 1, 2, 3)  The requests for permission to file appeals came from Danielle Belliveau on behalf of 15 Alpine residents and from attorney Marco Gonzalez representing Cleveland National Forest Foundation, Save Our Forests and Ranchlands, and the Coastal Environmental Rights Foundation.

Covert Canyon has a long history of operations that have drawn fines, administrative fees, and even a prior shut-down of operations for activities found to be not in compliance with county zoning and other requirements.

The Williams contend that for over eight years, since Covert Canyon began operations, they have lived24 hours a day, seven days a week with fear of losing their home due to wildfire started by gunfire, “being confined to our home during extreme reverberaqtion of automatic and other high-caliber weaponry” and “continuous harassing/threat be4havior to us, our riends, and family by emp;loyees and owner of Covert Canyo” as well as destruction of wildlife habitat including drainage of ponds ahd removal of native trees and plants, lead contamination of water, restricted use of California Land Conservation-Williamson Act Contract that is supposed to protect agricultural lands, and “loss of our scenic and restful retirement home.”

The Williams further contend that “firearms training continues night and day” in violation of a 2011 stipulated administrative order. They also cite fire dangers in “an area that has not burned in over 40 years—over two miles up a steep dirt road with grades exceeding 20%, and the nearest fulltime fire station with a response time 20 mintues away…”

Their appeal request cites concerns over the project’s history and fire safety.  ECM has asked the County for evidence that a representative from the County Fire Authority has signed off on a fire plan for Covert Canyon, but though a plan was provided, no evidence of any approval by any county fire official has been provided.    The appeal request notes that in 2010 the County’s Fire Appeals Board raised numerous fire safety concerts, albeit on a more expansive use of the property.

The groups also object, among other issues, to the lack of public hearings since 2010 and the applicant’s troubling history.  “Simply put, Covert Canyon has thumbed its nose at County enforcement staff for 8 years despite numerous notices and reprimands to cease commercial activity” including illegally grading wetlands to create berms for shooting ranges and illegally constructing some portions on protected forest land; the groups claim revegetation efforts were not monitored of completed by Covert Canyon.

The Belliveau  appeal request  states, “Our safety is at the forefront. Fire officials have deemed that in the event of a fire, fire crews would not be able to access the property in a timely fashion and a wildfire would be eminent. Second, there has been no environmental study to address the negative impactsw this firearms facility will cause. Third, property values have not recovered from the last downfall and this facility will decrease our property values even more.”

The request concludes, “It is deplorable that our County of San Diego granted this interim without a public hearing or exploring the possible environmental risks and risk to human beings who live in this area. It is insulting that the County of San Diego asks us to pay $1600 to appeal this interim order to have a public hearing…We make our homes here and this facility will destroy the quality of our lives.”

Asked why homeowners are being assessed a fee to appeal when no public hearing has been scheduled since 2010, Supervisor Dianne Jacob provided this response,  "A stipulated order doesn't come before the Board of Supervisors, but can be appealed to the planning commission.  In regards to Covert Canyon, the appeal period is still open and that process needs to play out. There are costs associated with processing an appeal, and the intent is to minimize the financial impact on taxpayers."

Serious objections based on fire safety were cited in 2010 in a document prepared by then-Rural Fire Protection Chief Nissan who refused to approve the project due to fire dangers.

Vince Kattoula, project manager with the County’s Department of Planning and Land Use, provided a copy of a fire protection plan within the stipulated agreement, prepared by a consultant hired by Covert Canyon.

Asked why there is no signature from the County Fire Authority signing off on the plan, Kattoula responded, “The Fire Protection Plan (FPP) is prepared by a Fire Protection Consultant who is on the County’s CEQA  [California Environmental Quality Act] Approved Consultant list. County staff does not sign consultant reports.  PDS and County Fire Authority staff worked together to review the FPP to ensure the Stipulated Administrative Enforcement Order (SAEO) contained conditions to ensure fire safety concerns were addressed. The SAEO allows the temporary use while processing a permanent discretionary permit and a final County Fire Authority approval will be required during the discretionary permit process.”

The stipulated agreement approved by the Department of Planning and Land Use director Mark does scale back some operations originally sought by Mark Halcon, owner of Covert Canyon.

The county’s Land Use and Environmental Group communications officer, Alex Bell offers this explanation for what led the county to enter into this interim stipulation, responded.

“In mid-2015, Covert Canyon, LLC (applicant) approached County staff with a modified and significantly reduced scale and scope of their proposed project. The original proposal from 2007 included the construction of an urban warfare training house, helipad, simulated ship training structure, and 45 feet repelling and training tower for training open to the general public.  The current interim use involves no new structures, is for training government military and law enforcement participants only with limited class offerings, ordnance, and hours of operation.”

Another  key change is an apparent ban by the county on shooting live pigs for military medic training, activities previously conducted without prior permission at the site, drawing media attention and a public outcry as well as objections from animal rights activists. According to Bell, the stipulated agreement “states that Covert Canyon must refrain from firearm use during first responder medic training. While this training may involve anesthetized pigs, it also frequently involves the use of dummies. The SAEO does not grant any new or expanded use related to the medic training.  It merely acknowledges a previously granted non-conforming use for medic training as described in Exhibit B.”

The project also has supporters. An earlier ECM article on the stipulated agreement  drew about 10 favorable comment post.

Former Assemblyman Jay LaSuer, who previously served in the Sheriff and San Diego Police Departments, stated in an e-mail to East County Magazine, “It seems that everybody is always ready to complain that law enforcement needs more training, tactical training, use of force training and any other training that will fit in any argument to find fault with law enforcement personnel or agencies.  Mr. Halcon’s facility fulfills a training need for law enforcement and our military….After a 31 year career in local law enforcement my only comment regarding the Covert Canyon facility is `Congratulations Marc Halcon, it’s about time!’  Perhaps the media should begin supporting law enforcement and our military rather than continually finding fault with them and those who support and train them.”

I don't have any involvement in this particular issue, but the article seems very fair and balanced. Sounds like this project is not appropriate for this area. We are all so worried about fire danger -- this firing range in this particular area is too much of a risk for the greater population in the area. Not appropriate.
I am glad to see this project moving forward after years of delay and added cost brought on needlessly when the law was being followed.
With an average of 22 vets a day committing suicide because of PTSD, I would hope that consideration is being given for the vets in the area of Covert Canyon. The rapid gunfire and copters flying in to Covert Canyon could be a trigger for a PTSD. This is an area with close by community members and I have read the gun fire can be heard a couple of miles away. Have some compassion for those that served and came home with invisible wounds. And it concerns me that some feel that there a need for a private site for military to train . Does not the military have training facilities for its men and women?
The Williams are a well-known couple in this area. Their parcel is akin to a junk yard. It is far from "scenic". They are consistently failed County Inspections on their "dwelling" (and I use that term lightly). THEY are the ones who have consistently acted in an irrational manner, even to the point of photographing the families of SEALS that Marc invited to Covert for a picnic. They have, over and over, "appealed" to agency after agency, and had their appeals turned down and/or found without merit. I urge the Planning Commission AND the Board of Supervisors to approve this facility for our law enforcement and military, as has been urged by U.S. Representative Duncan Hunter, State Senator Joel Anderson, the Alpine Community Planning Group and countless other government agencies.