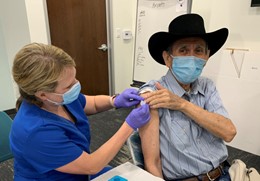 October 23, 2021 (Washington D.C.) – The U.S. Centers for Disease Control yesterday announced approval of booster shots for the Moderna and Johnson & Johnson COVID-19 vaccines. The Moderna booster approved is half of the original dose. Boosters of Pfizer, the third vaccine authorized in the U.S., were previously approved.

The CDC also provided consumers the option to mix and match, choosing a different booster than their original vaccine(s).

Who's eligible -- and when should you consider getting a different vaccine than your original dose?

Here’s who is eligible:

Everyone over age 18 who received a Johnson & Johnson single-shot vaccine at least two months ago can get a booster of the same or a different vaccine.

If you received your second dose of Pfizer or Moderna’s vaccine at least six months ago, you can get a booster of the same or a different vaccine provided you fit one of these categories:

Eligibility is largely based on the honor system; you can self-attest that you qualify at local pharmacies, for instance.

Why mix and match?

Effectiveness: Johnson & Johnson’s single dose vaccine was the least effective even when initially given, at only 70% compared to 95% for the two mRNA vaccines (Pfizer and Moderna). While all three lost some effectiveness over time, Johnson & Johnson had the largest drop in immunity protection.

Side effects:  A rare but serious clotting disorder was reported in 47 of the 15.3 million people who received the Johnson & Johnson vaccine, including five who died before treatments were found, the Los Angeles Times reports.  Women ages 18-49 accounted for 75% of the clots, so women under age 50 may want to opt for one of the other two vaccines. There are also 130 reports of people of all ages getting Guillain Barre-syndrome, a nervous system disorder that can last for months, after the J&J vaccine – but no cases of GBS in patients who got Pfizer or Moderna.

Young men should be aware that of every million men ages 18-24 who got one of the mRNA vaccines,  around 38 cases were reported of myocarditis or pericarditis, an inflammation of the heart muscle that typically goes away over time with over-the-counter anti-inflammatories. Slightly more cases were diagnosed with Moderna, but some also occurred with Pfizer. Cardiologist recommend avoiding strenuous exercise for three to six months after diagnosis. So a young male athlete who initially had mRNA vaccines may opt for the J & J booster instead.

Convenience: The Pfizer vaccine requires an extremely cold temperature for storage, making it more difficult to use in remote areas without special refrigeration units. So Moderna and the J&J vaccine may be more accessible in some places.

How safe and effective is mixing and matching?

A National Institute of Health Study found no short-term safety concerns and found that all combinations of original shots and boosters provided improved immunity, however the biggest boost was found in people who originally had Johnson & Johnson vaccines but got boosters of Pfizer or Moderna.

But the study was small, with only 150 people, 50  patients who had first received each of the vaccines. The study did not follow patients long term.

Risks of COVID vs. risks of vaccines

In weighing the rare but sometimes adverse affects possible from vaccines, it’s important to keep in mind the far higher risk of serious complications or death from COVID-19.  COVID can cause blood clots and heart inflammation – and at much higher rates than the vaccines. Only five deaths have been linked to vaccines (all J&J) used in the U.S., but COVID-19 has killed over 726,000 Americans.

The death rate overall from COVID in the U.S. is 1.2%, but the rate is far higher for those who are elderly, obese, or have preexisting conditions such as diabetes, cancer, immune disorders, or high blood pressure.

Studies have found that 10 to 30% of those who survive COVID-19 suffer “Long COVID,” meaning serious symptoms that last for months, years, or potentially, permanently.  These include major damage to the lungs, heart, brain, kidneys and other organs as well as symptoms such as loss of taste and smell.

If you’re hesitant about whether or not you need a booster, you can opt to get tested for antibodies and delay a booster shot until testing shows antibody strength is waning.