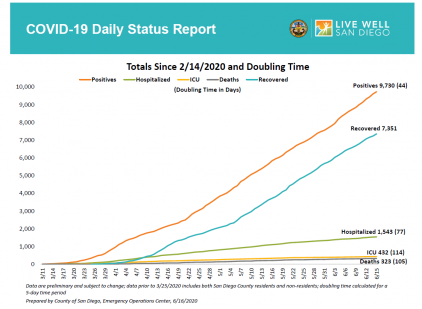 June 17, 2020 (San Diego) – San Diego County public health officials have voiced concern after four outbreaks of COVID-19 in a week have been traced to community settings including churches, restaurants and home gatherings.  Dr. Wilma Wooten, the County’s public health officer, reminds the public that if seven or more outbreaks occur in a week, the County would need to take protective measures,

“If we start to see an increasing number of community outbreaks, that would be a sign that COVID-19 is spreading at a faster rate because people are not following the public health guidance,” said Dr. Wooten. “That could result in the closure of businesses or certain sectors or even a full stop in the reopening of the local economy.”

The caution comes as record spikes and hospitalizations from coronavirus are occurring across much of the U.S. in areas that have reopened quickly, Reuters reports. That includes California, which reported its highest death toll in a week, with 86 deaths reported yesterday.

Locally, party-goers jammed into the Gaslamp District, many without wearing masks,  after bars reopened last weekend. That prompted San Diego Police to begin blocking off streets to allow more space for revelers to maintain social distancing of six feet apart. The City is looking to allow streets to be shut down for part of the weekend in the Gaslamp and Italy to allow restaurants to set up tables in the streets for more outdoor dining.

Though health officials have voiced concern about the prospect or a surge in COVID-19 cases in San Diego after massive protest marches, rallies and Memorial Day crowds on the heels of reopening businesses ranging from restaurants to casinos, so far our county appears to have largely dodged the bullet. La Mesa and Santee, which had large protest crowds, currently have 158 and 78 cases respectively and only a slight increase in cases with no significant spike. Many protesters did wear masks, which likely helped lessen transmission of the virus. 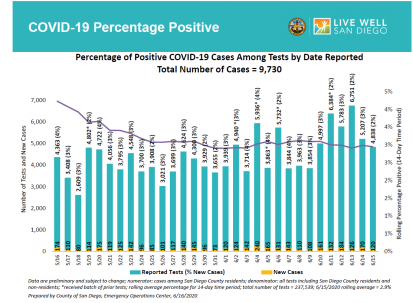 Although testing has ramped up and many more people are getting tested, the rate of positive test results has held steady at around 3% for weeks.  As of June 14, San Diego has had 9,730 cases, of which 1,543 patients were hospitalized, 432 wound up in ICU units and 323 died, so the death rate is approximately 3%.

San Diego has a total of 853 beds in hospital ICU units.  Currently just over half (440) of those are occupied, of which 133 are COVID-19 cases.  If too many ICU beds become occupied, that would be another trigger that would spark a rollback in reopenings.

Some neighboring regions have fared far worse, including Imperial County, which has the state’s highest per-capita rate of infections, as well as Arizona where 83% of hospital beds are now occupied, and Tijuana, Mexico which has a high rate of the novel coronavirus.

To prevent COVID-19 outbreaks, the county asks everyone to stay home if sick and isolate yourself from others. Maintain social distancing and wear a mask in public if within six feet of others to prevent spreading the virus if you have it but are not yet symptomatic. Avoid crowds to lessen your risk of exposure.

Wash hands regularly and use hand sanitizer. If you cough or sneeze, cover your mouth with a tissue and then throw it away and wash your hands.

If you see a business that is not following health guidance, you can report them by calling the non-emergency number for your local police department.