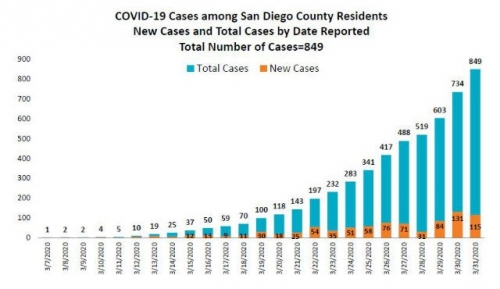 April 2, 2020 (San Diego) – Over 849 cases of COVID-19 have been confirmed in San Diego County. Of those, 1.4%, or 15 people have died, according to  County health officials. The county has identified several cluster outbreaks, including an outbreak in East County linked to the PalmCare Pharmacy in El Cajon,  NBC-7 reports.

A 25-year-old pharmacy tech who worked there , and who  had hoped to become a doctor, died last week at his family’s home in Riverside County. The pharmacy’s customers included many in East County’s Iraqi Chaldean community.

His family released a statement which reads in part, “He will forever be in our hearts.  May everyone know his vocation and devotion to help others exposed him to this virus that unexpectedly took him to soon from us, but he was not alone, his mother took care of him through the very end, thinking he was going to get better soon…Now, she asked for this young generation to take this situation seriously and make a difference in protecting themselves and others.  He will always be missed, but he's passing will hope bring awareness and make a difference.”

Noori Barka, PhD, president of the Chaldean League, told NBC that the pharmacy closed for several days for deep cleaning. But he voiced frustration that local health officials refused to warn the pubic about possible exposure.

“I was telling them, 'This is going to happen. Do something. Act on it. This pharmacy is going to infect other people,” Dr. Barka said.

Others have voiced similar frustration when county health officials, citing privacy laws, have refused to identify details about locations of some other outbreaks including cases at retirement facilities or nursing homes.

One bright spot amid the pandemic is the San Diego officials yesterday report that the county has distributed nearly half a million N95 masks to local hospitals.  The County currently counts 533 ventillators available for critical cases.

Supervisor Nathan Fletcher, speaking at yesterday’s press conference, indicated the next couple of weeks are critical for people to stay home and help prevent the massive numbers of cases and  high death tolls such as those occurring in New York, Italy and Spain.

“We know that the efforts are working. They are lowering the spread,” he said. “But the simple reality is that we face a horrifically contagious virus.”