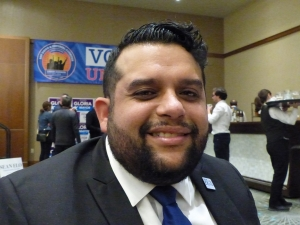 Photo by Miriam Raftery: Will Rodriguez-Kennedy at an election night party March 3

One week after the March 3, 2020 primary election he said that he began to experience COVID-19 symptoms. To protect those around him he “socially distanced himself in the event that he was given a diagnosis of COVID-19” the week prior to attempting to take the test. He mentioned that he had previously traveled to Asia.  He describes his symptoms as “seven days of fever, serious muscle aches, coughing, difficulty breathing, chills, sweat, nausea, difficulty balancing, and an inability to retain food eaten.”

Although the state of California mandates that all Californians carry insurance, Rodriguez-Smith stated that at the time he became ill, he “was uninsured, a veteran and attempted to seek care at Scripps (Green) Hospital.” At Scripps he paid $67.00 for the COVID-19 test.  But when the test came back positive, the potential inpatient costs were concerning. He was released from Scripps to home care.

Next, he says that he “reached out to a friend in Congressman Scott Peters office…to attempt to obtain care through the VA.” The Marine Corps veteran was signed up for the VA Healthcare System and entered the hospital “when symptoms deteriorated,” care available to any eligible veteran enrolled in the VA Healthcare System. He received treatment for COVID-19 at the VA Hospital in San Diego, soon winding up in the ICU unit.

ECM asked his impression of the quality of treatment that he received at the VA. He described his care as “exceptional…the Healthcare System has been better than other healthcare systems.”  He pointed out that the VA was socialized medicine; yet, the reality is that the VA Healthcare System is administering a benefit as a result of military service.

As for specific treatment that he received, he acknowledged that “not much can be done since COVID-19 is a virus. Doctors can only treat the symptoms, not the virus.” The VA staff provided round the clock care during his stay where he was provided “intravenous nutrition, oxygen, (and other services) relating to breathing difficulties, and complications.”

Asked about his aftercare, Rodriguez-Smith told ECM that he meets regularly with the pulmonologist for follow up care.  He “focuses upon his physical wellness while working to increase his lung capacity to normal range,” as his breathing was only at 80% in the hospital (normal range is 95%+).  In addition, he said he “is required to exercise” and as of the interview in May was still utilizing his oxygen, but is weaning himself off.  He stated he has “post viral inflammation damage to his lungs and experiences occasional chest pains.”

ECM asked the Democratic party leader what he thinks about the stay-home order issued by state and local health officials. He believes it is a “public duty to follow the order – practice social distancing.”

He also criticized what he described as the “broken healthcare system and economic reasons” as potentially tied to the COVID-19 incubation period, when some individuals initially may have been unable to access or afford testing (Free tests have since been made available by the state and low-cost testing by the county along with COVID-19 drive through testing at the VA Healthcare System by appointment).

Will Rodriguez-Kennedy was fortunate that he qualified for VA medical care even at a zero percentage disability. Once you serve in the military, you can apply for and obtain eligibility for services based upon discharge status. Yet, what about the remaining 99% of veterans whose medical care was interrupted as a result of the pandemic?  Or the many non-veterans who have never served in the military, yet struggle to afford health insurance and the costs of medical care?

Affordable healthcare for all remains a cornerstone of the Democratic Party’s platform, though how the nation might afford to fund such a massive expenditure on the heels of the COVID-19 pandemic remains a political hot potato issue.

Rodriguez-Kennedy’s case, like many others emerging during the COVID-19 pandemic, highlights the gaps in America’s healthcare system. 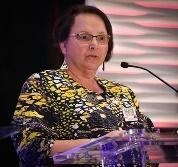 Dr. Helen Horvath is an Army veteran, published author, psychologist, and organizational development consultant.  As a speaker, she has been invited to speak at the American Psychological Association Annual Conference, Society of Industrial and Organizational Psychology, and other key professional organizations.  Dr. Horvath is a published author on a variety of psychology and business related topics.  She is a former marriage and family therapist and published a relationship book entitled “Put a Period to IT: When Divorce is the Option.”