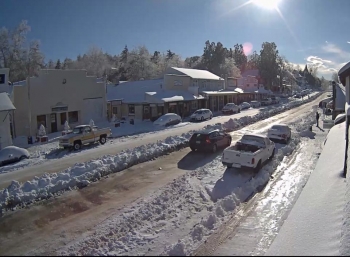 File photo from 2019: A shutdown could hit hardest in mountain towns such as Julian, where winter weather makes it difficult for businesses to operate outdoors.

November 9, 2020 (San Diego) – Churches, restaurants, gyms, theaters and some other locations will have to end indoor operations in San Diego County if the number of cases doesn’t drop out of the state’s purple tier soon. Retailers would have to reduce capacity.The state could order shutdowns as early as tomorrow.

Winter weather will make it harder for businesses and worship services to be conducted outdoors, particularly in East County’s mountain areas, which had their first snowfall of the season last night.

Although the testing positivity rate is 3.2%, the Orange Tier, two levels below the purple tier, a state cannot move into a less restrictive tier until both case rates and positivity rates qualify.

The County also reports a whopping 39 community outbreaks in the past week including a faith-based setting, a resort hotel/spa, several restaurants/bars, multiple businesses of undefined types, one retail establishment, a grocery store, and a barbershop, hair or nail salon setting. That’s far above the county’s own trigger threshold of 7 outbreaks in  a week.

A community setting outbreak is defined as three or more COVID-19 cases in a setting and in people of different households over the past 14 days.

ECM has received reports of some venues in East County violating county health rules, including a church where a parishioner has indicated the congregation was told to remove masks indoors, even with singing which is a known higher transmission rate of COVID than other activities.

The county urges people with and without symptoms who are at higher risk for COVID-19 to be tested. Healthcare and essential workers should also get a test, as well as people who had close contact to a positive case or live in communities that are being highly impacted.

To date, San Diego County has had 60,570 cases, with 401 new cases reported as of yesterday. Of those, 6.7% required hospitalization and 1.5% were admitted to an intensive care unit.  Regionwide, 908 people have died.

I could go through life and never wear a seat belt. I could use power tools and never wear safety glasses. I could ride a bike and never wear a helmet. I could forget about having insurance and just chance it. I could choose not to do any of these things and just hope and gamble that I will be the lucky one. Lots of folks do. But I do wear seat belts in an automobile. Saved my life more than once. I have had drill bits break and go flying and wood splinters crack a pair of safety glasses. My eyes survived though. Crashed on a bike back when and I wasn’t wearing a helmet. Aren’t stitches fun? And insurance has saved my financial butt several times. I play the odds in life. Not at a card table or with a roulette wheel, but in everyday life. I could choose not to wear a mask. Lots of folks do and will probably continue to not wear masks. I will continue to wear a mask. One, because I wouldn’t be able to shop when I need to or get a haircut. Two, it might save me some pain. I know folks who have come down with the COVID-19 bug and it isn’t fun. In fact, it’s darned unpleasant and expensive to treat. I have a sister who is a nurse and teaches nursing. It is a very real thing and I want her to live through this. Three, I might just be one of the lucky ones to carry this bug and have no symptoms at all. I might never feel ill from at all. But, in that case I might pass it on to someone I love and care about. Four, it’s just the smart thing to do and it really isn’t that hard for almost everyone. Honest, it really isn’t hard