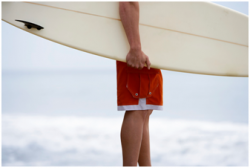 a– Detectives from the San Diego Police Department’s Western Division announce the arrest of Curt Simnitt (40) in connection with a series of vehicle burglaries that occurred between August and December, 2011.  Many stolen items have been recovered, ranging from surfboards to computers.

Today, San Diego Police detectives located Simnitt’s vehicle at a motel in La Mesa.  They determined which room Simnitt was in and attempted to contact him.  Simnitt initially refused to come out, but he eventually exited the room and was arrested without incident.

The thefts occurred in Ocean Beach, Pacific Beach, the downtown area and in the City of  La Mesa.  Most cases took place at San Diego beaches, however, the suspect also committed some of the crimes in shopping center parking lots.

“The suspect generally targeted beachgoers,” said Lt. Andra Brown with SDPD. “He would watch surfers, swimmers, joggers and others visiting the beach as they secured their belongings in their vehicle and then hid a key nearby.  After the victims left the area, the suspect would use the victim’s key to unlock the vehicle and remove nearly all of the property inside.  In some instances, the suspect forced entry to the target vehicles.”

Detectives identified Simnitt as the suspect, obtained a warrant and conducted a search at his residence. where they located property and evidence from approximately 50 vehicle burglaries.  Detectives recovered the property but, because Simnitt was in custody on unrelated charges, did not arrest him at that time.

While some of the property has been released to its owners, a large amount still needs to be returned.  The recovered property, including surfboards, wetsuits, backpacks, watches, wallets, glasses and computers, was made available for viewing by the media at the San Diego Police Department Western Division station.

Simnitt was booked into county jail on numerous charges, including 20 counts of possession of stolen property, five counts of identity theft, as well as burglary, forgery and possession of a controlled substance.  He is expected to be arraigned on January 18.