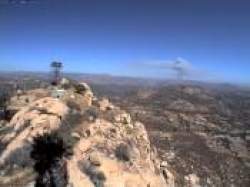 The wildfire, reported at 1:13 p.m. , is burning between Campo and Potrero near the Pacific Crest Trail. Incident Page Network indicates the fire is near the junction of Highway 94 and Star Ranch.

ECM photographer Dennis Richardson reports the fire is spreading rapidly and that additional air tankers have been requested. Dry fuel is "exploding" in some areas, he added.

“Currently the fire is inaccessible by ground units,” Cal-Fire battalion chief Nick Schuler said. “They are attempting to make contact with the fire now,” he said, adding that air tankers and helicopters are also on the scene.  There is no containment yet and no forecast for when the fire is epected to be contained.

Homes are not threatened at this point. Cause of the fire is under investigation.