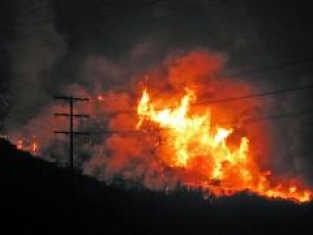 July 9, 2017 (San Diego) – Cox Communications and Cox California Telcom have filed a motion seeking limited party status in order to file a motion to strike what Cox calls “false and defamatory statements” that  San Diego Gas & Electric Company made in its application to the California Public Utilities Commission (CPUC) seeking authorization to recover $379 million in costs of the 2007 wildfires from ratepayers.

In its application, SDG&E stated that Cox’s actions caused the Guejito Fire and that Cox never inspected its facilities, statements that Cox contends are harmful to the company’s reputation and potentially, ratepayers.

Cox does not dispute that the fire was caused by a Cox lashing wire that came into contact with an SDG&E conductor. But  Cox notes,  it has never been determined whether the lashing wire was broken before the windstorm occurred (as SDG&E contends) or whether it was blown up into power lines during the high winds. Cox has stated previously that the company believed its line was “properly maintained and intact prior to the Santa Ana winds in 2007.”

Further, in its brief, SDG&E relied on preliminary reports on the fire that it previously told the CPUC not to use, because they were not reliable, Cox contends.   “It is, thus, outrageous (not to mention hypocritical and self-serving) for SDG&E to cite this evidence—which it previously discredited—to deflect blame from itself onto Cox in order to recover its WEMA [Wildfire Expense Memorandum Account] expensese,” Cox stated in its motion.

But SDG&E, in its response, states, "SDG&E relies, in large part, on the conclusions of Cal Fire and the CPSD, which COX contends have not been definitively proven and adopted by a trier of fact. Yet COX advances its own interpretation of the facts and evidence...which as Cox admits has also not been definitvely proven.

Moreover, SDG&E points out, it did acknowledge Cox's theory of ignition even though SDG&E disagrees with that theory, and includes rebuttal testimony by an SDG&E witness to document this. in addition, SDG&E's response says the primary evidence it relied on with respect to Cox's broken lashing was Cal Fire's Guejito Fire Investigation Report.  According to SDG&E, "Cal Fire further concluded that it was the broken lashing wire that caused the contact since the lashing wire 'unwound and made contact with a [sic] powerline conductor, causing an arc.'"

SDG&E observes that Cox's view that SDG&E made false statements by relying on this evidence means, "In other words, Cox is effectively contending that the conclusions of Cal Fire and the CPSD are false...SDG&E maintains that the preponderance of the evidence supports the conclusions regarding the broken lashing wire reached by Cal Fire and CPSD, and taht Cox has failed to show they were false."

SDG&E has asked the CPUC to deny Cox's motions. SDG&E further argues that the evidentiary portion of the proceeding is closed and that it's too late for Cox, which was noticed on the proceedings, to request limited party status.

The Guejito Fire started in the San Pasqual Valley on October22, 2007. It eventually  merged with the Witch Creek Fire. Along the Harris and other fires burning in San Diego County, the firesteorms trigger evacuation of a half million  people and charged nearly 198,000 acres.  They were among 21 fires burning statewide during the hot, dry, windy conditions.

IN 2009. SDG&E and agreed to pay the state of California $14.3 million to settle claims that it poorly maintained equipment that caused the Rice, Witch Creek and Guejito Fires, also issuing an apology for misleading investors, as ECM reported at the time. Cox agreed to pay $2 million and issued a statement which read, ““We believe that our line was properly maintained and intact prior to the Santa Ana winds in 2007, and did not cause the Guejito fire.”

SDG&E has since invested heavily in replacing many wooden poles with steel in order to fire-harden their equipment.