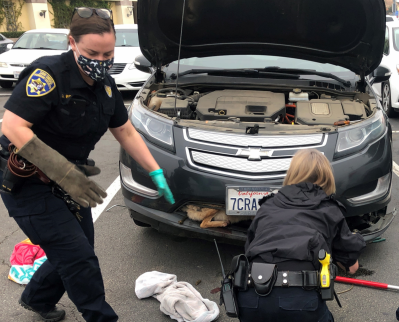 November 18, 2021 (Ramona) – A not-so-wily coyote has been rescued from inside a car bumper, where it became trapped after being struck by a motorist. (No reports of any roadrunners or Acme products in the vicinity). Fortunately, the senior female coyote is now back in the wild, after treatment at the San Diego Humane Society’s Ramona Wildlife Center.

The amazing rescue was documented on video on November 1, when San Diego Humane Society’s Humane Law Enforcement was dispatched to rescue an animal lodged in the bumper of a car in a San Marcos parking lot.

The person who hit the coyote did not realize that she was stuck in his bumper and was inside a Ralphs grocery store when another shopper noted a "dog" in the bumper and called for help. The car’s owner was alerted to the situation when he came out of the Ralphs.

Humane Officers recognized the need for medical backup and called San Diego Humane Society’s veterinary team to the scene to assist and monitor the coyote’s wellbeing as she was cut out from inside the fender.

Upon intake at the Ramona Wildlife Center, the coyote could stand and walk. The veterinary team performed multiple exams and extensive radiographs to ensure there were no fractures and no internal bleeding. The coyote’s teeth revealed her age as a senior.

“She was actually in wonderful condition before being hit by the car,” said Christine Barton, director of operations & wildlife rehabilitation at San Diego Humane Society’s Ramona Campus. “Her coat and weight are exactly what we want to see in wild animals. We are so happy she recovered quickly and could be return 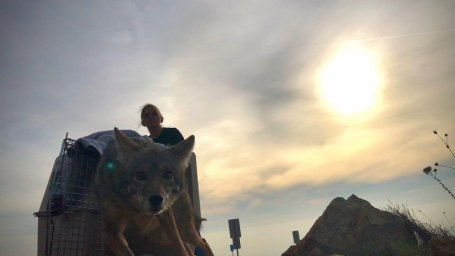 ed to her natural habitat.”

The coyote was released in the late afternoon of Nov. 18, 2021, in a nearby San Marcos Parks & Recreation Department location, not far from the San Marcos parking lot where she was found. The Humane Officers and medical team who rescued the coyote were also present, to witness their patient’s return to the wild.