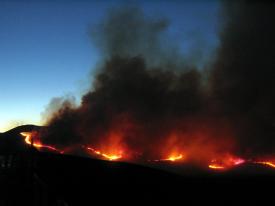 On October 15, California Public Utilities Commission (CPUC) administrative law judge Maribeth Bushey issued a proposed decision to deny the WEBA application.  However Commissioner Timothy Simon issued an alternate proposed decision that would allow a WEBA, but restrict it only to fires in which the utility was found not at fault by the CPUC after inverse condemnation has been made. In cases where the utility’s lines caused a wildfire through no fault of SDG&E, the utility could recover 90% of costs over $10 million under Simon’s plan.

Both decisions leave the door open, however, for SDG&E  and Southern California Gas Company to seek compensation through other ratemaking mechanisms already available for recovery of uninsured wildfire costs from ratepayers, who may ultimately be forced to pay the tab.

Southern California Edison and Pacific Gas and Electric have previously withdrawn their applications for the WEBA.

Simon observed that if utilities could be held liable even for wildfires in which they are not negligent, local governments and others would have incentives to sue and stick shareholders with potentially billions in losses.  (Power lines may ignite for a variety of causes other than negligence, ranging from car accidents to balloons or birds on lines.)

More than 800 people attended CPUC hearings in San Diego on this hot topic, including 100 who presented comments on the record, as ECM reported in April. The vast majority opposed the concept of a WEBA.

Four consumer groups filed a joint brief in opposition to the wildfire cost recovery proposal.  They argued that a reasonableness standard should be applied and that it would be unreasonable to “shift liability for wildfire costs caused by utility negligence or recklessness from shareholders to ratepayers,’ further arguing that to do so would give utilities no incentive to assure that lines are asfe.

The Mussey Grade Road Alliance represents Ramona residents in a neighborhood that lost two-thirds of its homes in the 2003 Dedar Fire and was again threatened by the 2007 Witch Fire which SDG&E lines caused.   The Alliance presented expert testimony indicated that ignition of power lines are under the utilites’ control—and that to prevent catstrophic firestorms, utility companies should adopt high engineering standards for power lines.  To approve a WEBA, the group argued, would remove the only significant financial incentive that utilities have to improve wildfire safety.

Diane Conklin, spokesperson for the Mussey Grade Road Alliance, said her organization is currently reviewing the two decisions and has no comment yet on the two conflicting decisions.  The CPUC has the option to choose one or the other, amend and combine them, or reject both and come up with something else entirely.  According to the CPUC, neither the proposed decision nor the alternate proposed decision will appear on the Commission’s agenda for at least 30 days after they are mailed.

Donna Tisdale, chair of the Boulevard Planning Commission and head of two East County nonprofits (Protect our Communities Foundation and Backcountry Against Dumps) has also testified against the WEBA proposal.

Asked by ECM about her reactions to the decisions, Tisdale responded, “I agree with the CPUC Administrative Law Judge’s proposed decision that rejects the request of SDG&E and SolCalGas—finding that the companies had not proven that the proposed rates would be just and reasonable.”

The impartiality of both Simon and Bushey has previously been called into question.  During the CPUC hearing in San Diego, former City Attorney Mike Aguirre testified that Bushey is a former SDG&E lawyer who blocked SDG&E executives from having depositions taken—depositions sought by wildfire survivors.   News stories have exposed that Simon accepted trips and gifts paid for by SDG&E.

Many who lost homes in the 2007 wildfires had not yet received a single penny, fire victims told Bushey and Simon in the hearing.  Supervisor Dianne Jacob denounced SDG&E for paying lavish bonuses to executives while refusing to do right by victims of the fires that its poorly maintained lines caused.

Tisdale voiced concern that the CPUC board "will likely override the ALJ's justified proposed decision and approve the SDG&E application to place the huge financial liability on the backs of ratepayers instead of making stockholders pay."  At the same time, the CPUC keeps rubber stamping industrial scale fire sparking wind turbines and solar projects with related new substantion and transmission lines into the most wild and fire-prone areas of San Diego Coutny--zoned as Very High Fire SEverity Zones," she noted.

Tisdale has called for a RICO invesgiation into overly cozy ties bewteen commissioners and SDG&E/Sempra Energy. "In my opinion, the entire system is broken, corrupt, and controlled by vested utilities and their well-paid lapdogs who keep getting richer at the expense of their customers," concluded Tisdale.

Her fear is palpable. Tisdale's Boulevard ranch, threatened by several recent fires,  was scorched last week by the Shockey Fire that burned down 11 homes--making clear the very real danger that wildfires continue to pose to backcountry residents in East County.

View the proposed and alternate decisions here, along with a summary: