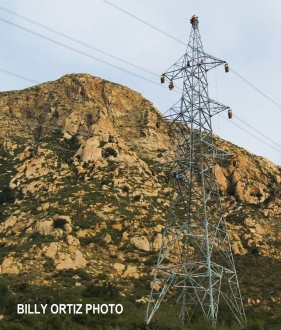 ECM asked Supervisor Jacob for her reaction to Picker’s proposal. She fired back this heated response: “This is bull. Michael Picker should be ashamed of himself for floating an idea that sounds like it was cooked up by a utility company fat cat. The fact is that monopolies like SDG&E have failed to do the responsible thing and fully harden their rural lines and other facilities against wildfire,” Jacob wrote, adding, “Picker’s proposal would not only be a blatant ratepayer rip-off, but would allow outfits like SDG&E to continue to put shareholder profits over public safety.”

Jacob later posted her comments on Facebook, where constituents thanked her for fighting on behalf of rural ratepayers. One resident, Melanie Cothran Monroe, observed wryly, “And how would they even decide what qualifies as `Rural?’ Number of miles from a Starbucks?’

The concept also drew heated discussion on the Descanso Neighbors Forum.  Billie Jo Jannen, chair of the Campo-Lake Morena Community Planning Group, wrote, “Welcome to another salvor in victimizing rural people for the bad decisions of the majority.”  She called it a “fire fee by any other name,” a reference to a state-imposed fire fee on rural areas that was repealed after vocal protests by rural residents, who argued that fire protection costs should be shared equally among all state residents.

The CPUC last year voted against allowing SDG&E to charge ratepayers for wildfires that Cal Fire concluded were caused by SDG&E lines and equipment in 2007.  The utility has invested significantly in fire hardening its lines, such as replacing many metal poles with wooden ones, and adding fire-detection video cameras.

However, shortly after the CPUC shot down the wildfire expense reimbursement proposal, SDG&E began shutting off power intentionally to rural areas in windy, dry weather, in some cases for days at a time. The utility denies that the planned outages were in response to the CPUC decision.

Some communities have had ten or more shutoffs in a span of a few weeks, leading to many complaints of unreliable power supply, costs of replacing spoiled foods, inconveniences and dangers posed by being left without communication or water pumped by electric wells during the repeated outages.

June Mooney opined sarcastically on Facebook, “oh, how nice…I wonder, would I rather pay more for electricity or have the power shut off during windy weather?”

In online discussions, some residents called for lines to be put underground – and not paid for by rural residents already saddled with risks they didn’t seek out and burdened with costs and inconveniences from power outages.  Some who lost homes in the 2007 firestorms now feel twice burned.

Others suggest the answer to rising utility rates is to go off grid. Jannen wondered if communities might set up their own interim financing service for people who qualify for the HERO program, which helps homeowners invest in making homes energy efficient.

Raimi Abdel posted on the Descanso Neighbors Facebook page, “It’s time for us as a community to move towards renewable and alternative energy. It’s on my to do list.”

Rubbing salt in the wound is that fact that many rural residents resent the Sunrise Powerlink high voltage power line and big energy projects put in over their objections, all raising the fire risk in their backcountry communities.  Moreover, mitigation funds that were supposed to flow to residents closest to the Powerlink have caused divisiveness, with some residents complaining of inequities in the distribution of those funds.

Donna Tisdale, chair of the Boulevard Planning Group, told ECM via email, “I have heard complaints that some locals filed for grants every year but have been turned down immediately.  Another local with our fire safe council said that applicants need to be compliant with other fire safety regs like clearance and tree trimming, before they will get a grant.  All I know for sure is that my little section of Boulevard is outside the Sunrise Powerlink grant application boundaries.”

Boulevard has, however, had major energy projects from the Eco Substation to transmission lines to Tule Wind farm in McCain Valley, raising fire risk for Boulevard without the financial offsets that some Powerlink neighbors received.  So, the idea of now being charged more for electricity than urban residents rankles rural dwellers.

Kim Hamilton, editor of the Deerhorn Valley Antler, faults the CPUC for allowing Powerlink to be built.  “Ten years ago, the CPUC approved miles of overhead transmission lines through some of the most flammable backcountry in San Diego County,” she said of the Sunrise Powerlink.  “They put at risk thousands of rural residents living downwind of the lines.  Public safety was NOT an overriding consideration then. There were safer (though more expensive) options.”

She points out the CPUC and SDG&E “knew the overhead transmission lines would 1) increase the probability of a wildfire and 2) interfere with ground and air attacks by firefighters.”  The mitigation money was intended to help homeowners clear defensible space and make homes more fire resistant, though even that would only partially mitigate, or offset, the risks.

“Thousands of East County residents now live downwind in Fire Path on Steroids,” Hamilton wrote in an email to ECM asking her reaction to Picker’s proposal.  “The promised fire grants have been diluted to a dribble, and fire season is now year-round. How much longer will residents be asked to pay for such foolish decisions by our CPUC?” she asks, adding, “What in the world are they thinking?  Just appalling.”

SDG&E needs to be accountable for their decisions - not ratepayers. If putting wires underground was decided to be too expensive in rural areas, than they should have to pay for any resultant fires caused by that decision. Money would be better spent on prevention for public safety first rather than losing life, property and the back country environment and still paying out $$$ in the aftermath. We retired to the Warner Springs area and were also affected by the recent unplanned prolonged power outages.

The chairman of the Alpine Community Planning Group Sunrise PowerLink AdHoc is the director of an eco-group that to date has gotten over $300.000 and 2500 acres of land from SDGE. Connect the dots. BTW, it appears the Sunrise PowerLink is about to get more energy sent over its lines...with Alpine already worried about EMP levels on the boulevard from the buried cables.
Some say that the Alpine Community Planning Group had something to do with giving approval for SDG&E to go ahead and build the Power Link in Alpine, and right down Alpine Blvd (underground), causing years of disruption to small business owners, residents, and homeowners. Not to mention that there are serious risks of cancer associated with the Sunrise Powerlink.. "Question Authority" the old bumper sticker said. Why,if the majority of Alpine residents did not want the Power Link going through town, did they end up getting it anyway ?
Alpine has the luxury of undergrounded lines for the 60-year lifespan of the Powerlink. There is an old saying about looking a gift horse in the mouth. For a few years of disruption, you are spared the worst of the fires in our future. Those of us that are true "rural" residents and live in the shadow of the transmission lines heard what SDG&E said when it got its approval to run the overhead lines to our immediate east: The overhead lines will increase the probability of wildfire, and they will absolutely reduce firefighters ability to fight a fire while it's small. Catastrophic fire is in our future. So forgive me if I don't feel all that sorry for suburban Alpine— with its paved roads, sidewalks, easy evacuation routes, AND underground transmission lines. You are also taking a big share of the fire grant funds SDG&E promised every year— grants to ensure we had some kind of defense against Powerlink Fires. Hey, it's us— your rural neighbors— who are in the fire path. And now CPUC wants to add to the damage and charge us more for their shortsighted and foolish project. I mean no disrespect to Alpine— but It's a bit of a challenge to feel sorry for you. Namaste.